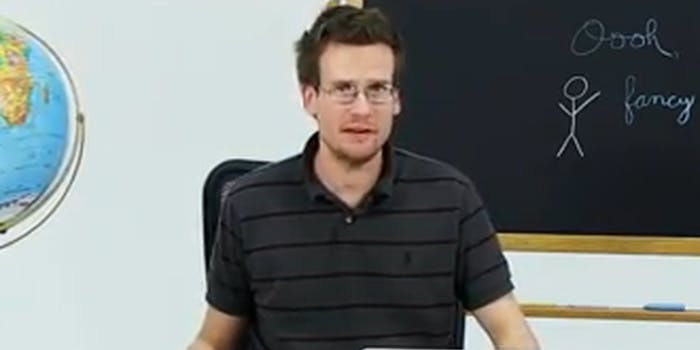 From Crash Course by the vlogbrothers to asapScience, YouTube stars are creating educational videos that are fun, engaging, and ready for the classroom.

Welcome to the future of education.

Students are now able to watch a video and ask questions directly to the person behind it, but it’s not their teacher. The person in the video is likely someone they’ve never met, never will meet, and located thousands of miles away from their classroom.

It might sound like something straight out of The Jetsons, but we’re not there quite yet. We don’t have flying cars, and our professors haven’t been replaced by robots.

Teachers across North America are, however, using YouTube videos as a teaching aide and many people—from students learning the material for the first time to adults who just want to learn something new—are benefiting from it.

It’s part of YouTube EDU, a one-stop shop for educational videos on just about anything. Having trouble with algebra? There’s a course for that. Need to understand the science involved in cooking? Harvard has you covered. And there’s even a central hub where you can choose a foreign language to learn, whether it’s to help you in a class at school or just to prepare for an upcoming vacation.

“What YouTube really imagines is a world in which any person with high speed Internet access can, if she or he is adequately motivated and works hard, have access to a good education through online video,” John Green, a New York Times bestselling author and one half of the popular YouTube duo vlogBrothers, told the Daily Dot.

“There’s no way that online video can replace physical classrooms led by educators. But in the developing world, these resources could really be revolutionary.”

Green runs Crash Course, where he teaches world history going back to the agricultural revolution while his brother, Hank, teaches biology (in addition to hosting SciShow) to thousands of people per video. The lessons have ranged from the Atlantic slave trade to the Columbian exchange, condensing topics that could be hour-long specials into quirky, engaging, and quickly paced tutorials that last roughly 10 minutes. To date, Crash Course has accumulated over seven million views.

Crash Course and SciShow are just two of the channels funded by grants through YouTube. However, such activity probably would not have been possible without the success Khan Academy, a nonprofit that hopes to provide education for everyone for free. Khan Academy founder Salman Khan made his first educational video for his cousins in 2006, and he’s since made over 3,200 videos, which have been watched over 158 million times. Khan has received funding from Bill Gates and YouTube to keep the educational videos coming. He feels that his videos are a way to connect with a student one-on-one.

“It’s intimate, like we’re both sitting at a table and we’re working through something together, writing on a piece of paper,” Khan told Wired magazine in 2011.

For the first time, students are able to communicate directly with the source of the material unlike with a textbook—unless your professor wrote the book for the course. You finally have a say in the lesson material.

Is the video too confusing? Let them know. Want to tell them they’re awesome? They’ll probably appreciate that, too. And if you have a problem, you can email them directly or leave a comment in the video.

“Our format is particularly challenging since we try to find these remote or unexpected connections and then justify them,” said Mike Rugnetta, who runs PBS Idea Channel.

“We’re less focused on relating interesting facts and more focused on starting a lively discussion. Because of this, so much of our process is road testing our ideas by trying our best to poke holes in them, find their weak points.”

PBS Idea Channel looks at the connection between pop culture, technology, and media, whether it’s covering LOLCats, “Super Mario Brothers,” or bronies. Rugnetta has only made 12 videos so far but looks forward to interacting with the audience.

“They’re incredibly smart, really engaged and love having a good conversation,” Rugnetta said. “We’ve consistently found that they’re not afraid of or alienated by the hard, super-interesting stuff.”

While many schools in the U.S. have YouTube banned from their system—many do it as a precaution despite the YouTube for Schools initiative announced in December—it’s already been integrated into Canadian schools.

“A lot of teachers now use hooks, so they start with the short YouTube video to get kids engaged,” noted Gregory Brown, a high school biology, chemistry, and visual art teacher and one half of the new education channel AsapSCIENCE.

“A lot of kids, no matter what’s on YouTube, if it’s in a classroom they’re excited by it.”

“Sometimes when you say the word ‘education’ I think a lot of young people don’t want to sit down and learn, but the medium helps a lot,” he said. “Hopefully that’s where technology is a hook for people to become inspired to learn.”

Videos have long been a hook to get students to learn, from old documentaries on animal life to the Schoolhouse Rock! educational videos from the ‘70s that made learning about concepts like the Constitution, grammar rules, and the process of how bills become law—all bundled up with a catchy tune.

Many people, such as Green and Brown, see a clear lineage from Schoolhouse Rock! to YouTube and hope that more schools will allow educational videos to be used in the classroom.

“We want the videos to be fun to watch,” Green said, “but we also intend them to be conversation starters and curriculum supplements, so we’re thrilled when teachers and students share them with one another.”

“It is probably going to evolve because education … as a movement is using those tools to educate,” Brown added. “They’re realizing that’s actually what students are interested in.”