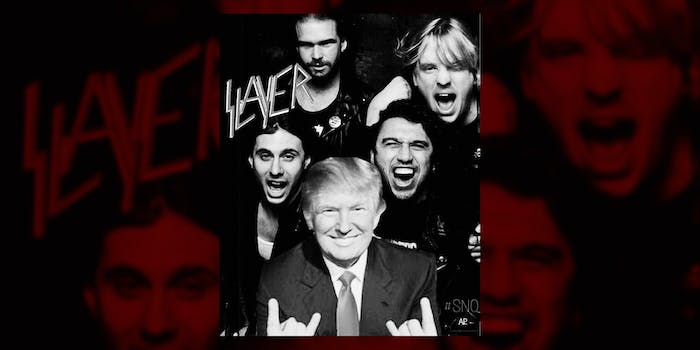 Slayer’s lead singer Tom Araya took to Instagram to let ”snowflakes” know just how he feels about their negative reactions to his President Trump post. He doesn’t say he voted Trump, but claims to have used the stunt to intentionally anger his fans.

Araya posted a digitally altered photo of the metal band with Trump on the band’s Instagram account Monday evening. He said he originally posted it on Jan. 20 but woke up the next morning to see that it had been taken down.

“I was amazed at the comments about the picture some positive some negative more amazing was in 2 hours there was 10,000 likes,” he wrote. “But I never would have guessed that there were so many snowflakes commenting their distaste for the new president. Like him or not he is the president.”

Believe it or not this picture was posted by me Tom Araya on 1/20 cause I thought it was funny … I was amazed at the comments about the picture some positive some negative more amazing was in 2 hours there was 10,000 likes … But i never would have guessed that there where so many snowflakes commenting their distaste for the new president. Like him or not he is the president … woke up the next morning and found someone had deleted the post … can some one please explain why…?

Almost 200,000 fans commented on the post, at press time. Many were appalled that the band would show support of the newly elected president, while others displayed support for Araya’s post.

“Thanks for insight… this is how fake news gets started, not once did I say that I supported trump,” he wrote. “Assuming I speak for the band you are mistaking .. the picture did exactly what I thought it would do… piss some of you off.”

Araya personally responded to other comments. One user, @Zogar77, commented, “I’d be more worried about Mike Pence, if he gets his way he’d ban heavy metal and anyone that’s different.” Araya responded to the user with laughing emoji and said “Mike Pence turning fruits into vegetables.”

Michael Nelson from Stereogum pointed out that “turning fruits into vegetables” was presumably a joke about Pence’s support of gay conversion therapy. @Zogar77 responded to Araya, saying “I happen to be gay… so fuck you and your fruits to vegetables comment.”

REJECT the term Alt-Right, just another sneaky euphemism for white supremacy, call it what it is!

Don't let them hide behind dishonesty!

Like, not even getting into the "snowflakes" and "fruits" shit, which is indefensibly gross. pic.twitter.com/s2cyYGtHPu

Kirk from Metallica goes on an anti fascist rant in Twitter, slayer posts a pick with trump. High school me made the right choice in metal

Man it's a good time to have never liked Slayer. Meanwhile Kirk Hammet making me proud to have been a Metallica stan.

Araya took it upon himself to respond to some of the critics in the comments. In one comment, he shared the definition of a “snowflake,” according to Urban Dictionary.

“An overly sensitive person, incapable of dealing with any opinions that differ from their own,” he commented. “These people can often be seen congregating in ‘safe zones’ on college campuses.”