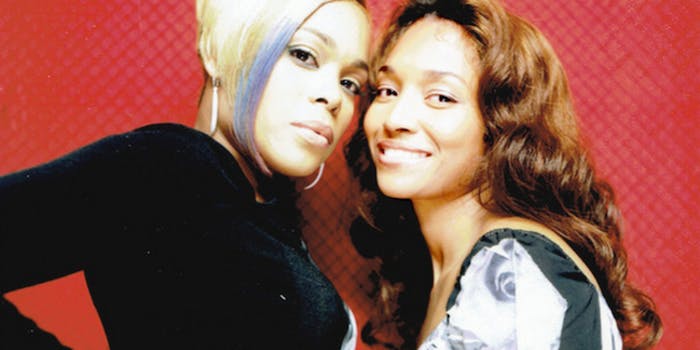 Ain't too proud to beg.

If you happened to catch CrazySexyCool: The TLC Story, you got a sense of the financial struggles the ’90s R&B trio endured, even as the band’s debut went multiplatinum.

A new TLC album hasn’t been released since 2002’s 3D, but remaining members Chilli and T-Boz (third member Lisa “Left Eye” Lopes died in 2002) spoke of a new album back in 2009. Over the weekend, the duo took to Kickstarter to fund its latest—and final—album. TLC is looking for $150,000 by Feb. 19, so it can make the final album on the band’s terms.

As the Kickstarter page explains:

Our final album will stay true to the TLC sound, always confronting the real issues and life experiences that we all must face every single day, everywhere. We write music that people relate to…timeless music. No matter the trends, we feel like our music is always relevant.
You’ll always have a guy hanging out the passenger side!
And sometimes you’ll feel damn unpretty!
We will continue to make music for EVERYONE, music that’s UNIVERSAL, TOUCHABLE.
This final album will be the first studio album by the two of us. Of course, Lisa’s spirit will always be present in our music. That will never change.

There are the usual perks if you contribute, but a $50 donation gets you a TLC “dance school,” in which you can learn dance moves from TLC videos.

For $2,000, you can take a workout class with Chilli. For $5,000, you can have a SLEEPOVER with either T-Boz in L.A. or Chilli in Atlanta, complete with some #TLCPillowTalk.

Sixteen-year-old me is screaming.