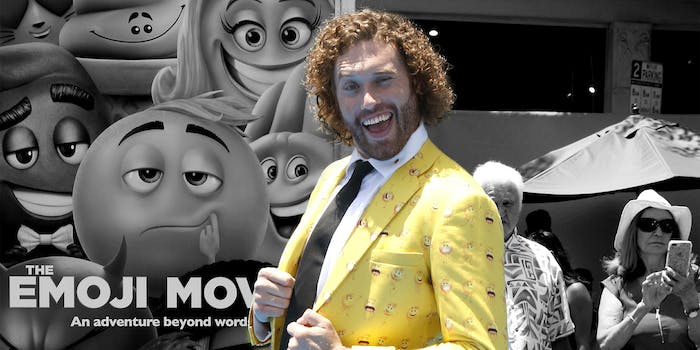 T.J. Miller, Iliza Shlesinger, and the never-ending debate on women in comedy

For f*ck's sake stop talking about whether or not women are funny.

On Sunday, Vulture published a white-knuckle interview with actor and comedian T.J. Miller, in which he spritzed the interviewer with mineral water, offered his thoughts on capitalism, and had an opinion about why women aren’t as funny as men:

“They’re taught to suppress their sense of humor during their formative years.”

The context of his quote is unclear, but on Monday, Us Weekly ran a piece about his comment that included a quote not found in the Vulture interview. As of Tuesday afternoon it had been deleted from the piece (without an update or correction), but not before the quote was circulated for roughly 24 hours as Miller’s own.

It was pointed out that this quote sounds a lot like that of comedian Iliza Shlesinger, who said in a June Deadline article:

A Refinery29 story includes Miller’s quote from the Vulture piece and Shlesinger’s. It’s not clear if Us Weekly sourced from Refinery29, but scanned quickly in search of a clickbait headline, it could seem like Miller’s quote.

Miller spent some time clarifying his Vulture comment on Monday, and letting women know about how they’ve been oppressed.

Okay, I guess everyone and their parents missed the point–#feminist
SOCIETY *supresses* humor in women bc it is a sign of intelligence.

Trust not those who make click bait, but those who will one day admit they were confused and would not admit it, better to villify a villain

Don't get it twisted. The world gets better the more we empower our literal better half.

Women ARE FUNNY, against odds that men don't face.

that is THREATENING to men, & so women are taught to suppress those intimidations. It is about SOCIETY's ills, the misogyny of women's humor

While the misattribution highlighted lazy journalism and aggregation, it also highlighted the difference in response. Shlesinger was roundly criticized by other comedians for policing what women can say onstage, and reducing us to just vagina jokes. She spent days defending her point of view on Twitter. It illustrated how much more pressure there is on women—and not because they’re “taught to suppress their sense of humor during their formative years,” as Miller said. That’s a ridiculous statement, but he didn’t get half the criticism Shlesinger did.

Miller is doing promotion for The Emoji Movie, which recently used The Handmaid’s Tale, a story about women’s oppression, for parody, and was directed and written by men. Miller told Variety that the film has a “feminist agenda”: “Men should be expressive, women should be able to be feminine and girly while at the same time being assertive and strong protagonists.”

But that’s nothing revelatory, and as his rambling tweets prove, Miller isn’t who we should be asking about women’s experiences and representation.

There’s just no shortage of funny women who speak to this with more authority. If you need a starting point, watch the work of these three:

Issa Rae: Season 2 of her HBO series Insecure debuted on Sunday, and Rae—a writer and comedian who started out on YouTube—has created a place where she can explore women’s self-doubt, professional ambitions, pay gaps, friendships, trust issues, and flaws. It’s a stunning show not just about how you live, but also where.

Andrea Savage: The new series I’m Sorry examines the messiness of motherhood, working in comedy, and what women have to apologize for.

Michaela Coel: Her series Chewing Gum, which Coel wrote and stars in, is now in its second season. It’s a refreshing look at sexuality, religion, and identity, and there’s really nothing else like it on TV. Earlier this month Coel gave a powerful speech about pushing through setbacks to tell her story.

So let’s dispense with that tired fucking argument and maybe focus on the many women who have somehow—even though society suppresses them, man—managed to create standup specials and shows and films that are funnier, more real, and more revelatory than The Emoji Movie ever will be.