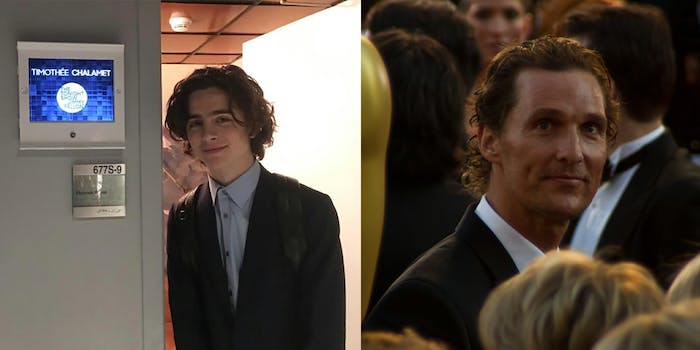 Timothée Chalamet can do an (inter)stellar impression of Matthew McConaughey

Timothée Chalamet is nominated for an Oscar for his performance in Call Me By Your Name, but he’s already earned an important award in the hearts of countless fans for his impression of Matthew McConaughey.

In 2014, the 22-year-old actor played the younger version of Tom Cooper (the older version was played by McConaughey)  in Interstellar. So basically, Chalamet was a miniature McConaughey.

At some point during the making of Interstellar, McConaughey left Chalamet a voicemail that Chalamet can now recite verbatim—because who wouldn’t do that if McConaughey called them and referred to himself as your “movie dad,” right?

Chalamet performed an impression of the voicemail to the folks at GQ, and it’s pretty spot on. Listeners can hear McConaughey’s accent seep into some of the words as Chalamet recites the 48-year-old actor’s words verbatim.

Honestly this is incredible but who the hell memorizes a voicemail omfg. Also who the HELL doesn’t write back to McConaughey??

You obviously have more video content, RELEASE THE FOOTAGE

He recited it at the virtuoso #Awards at the #SantaBarbara film festival in January-word for word! #sbiff Kind of #hilarious #MatthewMcConaughey #TimotheeChalamet #voicemail

Hopefully for Chalamet’s sake, he will continue to take after his “movie dad” and win the best actor award at the Oscars on Sunday.