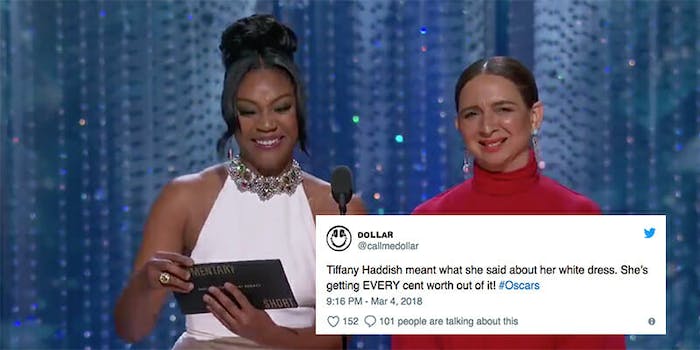 All hail the queen of being frugal.

Tiffany Haddish is officially the queen of being frugal. The Girls Trip breakout star and comedian made history when she appeared on Saturday Night Live in November as the first black woman comedian to host the late night show. During her opening monologue, she wore a $4,000 white Alexander McQueen dress that she had already sported on the red carpet for the Girls Trip premiere.

“I don’t give a dang about no taboo,” she explained. “I spent a lot of money on this dress. This dress cost way more than my mortgage. This dress is Alexander McQueen. It’s a $4,000 dress. I’m gonna wear this dress multiple times.”

She didn’t lie. The comedian showed up to the Oscars wearing the white dress to present the award for Best Short Live Action Film with Maya Rudolph—and everyone is here for it.

‘@TiffanyHaddish wearing her Alexander McQueen again! LOVE IT. She said she was going to wear it multiple times! Save that money girl #Oscars pic.twitter.com/0Np8hJ8K1q

Tiffany Haddish meant what she said about her white dress. She’s getting EVERY cent worth out of it! #Oscars

Tiffany Haddish is wearing the same white Alexander McQueen dress she wore on the red carpet for Girls Trip, and hosting SNL, a dress that cost more than her mortgage, and the one she vowed to wear again and again. "I don't give a dang about no taboo!" #Oscars pic.twitter.com/AErmQgkZFt

Go off and save money, Tiffany.