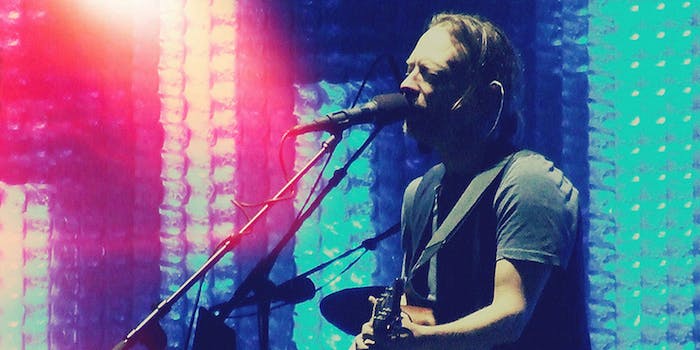 The man knows how to tickle our curiosity.

The latest is a photo of a mysterious white record that appeared on his Tumblr. He and Nigel Godrich, the producer often thought of as Radiohead’s sixth member, tweeted a link to it, prompting rumors of a new solo or Atoms For Peace record.

The Tumblr post follows several months’ of cryptic, black-and-white landscape drawings marked by mountain peaks, leafless trees, and funerary obelisks—including visuals from their psychedelic PolyFauna smartphone app, which the two recently updated with a trove of new, original music. Some of these images have shown up on Yorke’s Twitter timeline as well.

Because Radiohead only just started recording new work this month, speculation has veered toward some other type of collaboration between Yorke and Godrich. But does it really matter? Unless it’s an album of Celine Dion covers—and maybe even then—you’ll buy it.