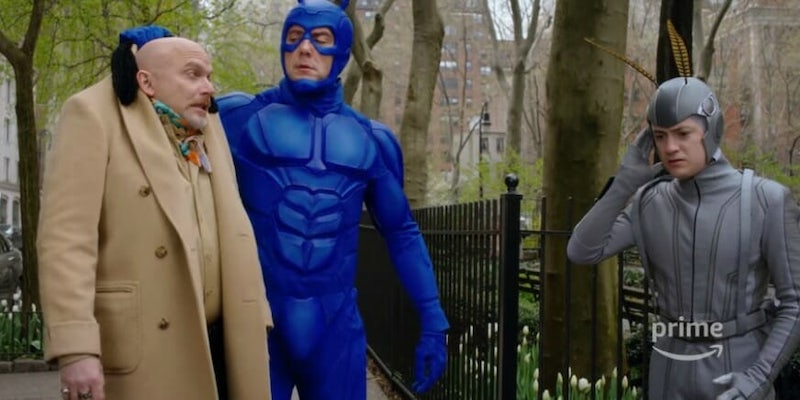 Amazon’s ‘The Tick’ is a surreal, hilarious deconstruction of superheroes

This Tick feels more grown up, but he's still got his childlike innocence.

As a child, Arthur Everest loved superheroes. He knew all their names, he had all their action-figures, and he spent his free time recreating their mighty battles in his bedroom. Then one of those spandex-clad kerfuffles claimed the life of a beloved family member, right in front of young Arthur’s eyes. Years later, Arthur has grown into a nervous, heavily medicated accountant who’s secretly obsessed with proving the villain responsible for ruining his life is still alive out there, somewhere. Then destiny sideswipes him once again in the form of the Tick, a blue-suited, nigh-invulnerable, possibly insane vigilante with a passion for justice and tortured metaphors. The Tick finds common purpose with Arthur, gifts him with a stolen super-suit, and declares Arthur as his sidekick—whether Arthur is on board or not.

Tick creator Ben Edlund first introduced the world to his big, blue, super-powered doofus way back in 1986. Since then, the Tick has been the star of both a Saturday-morning cartoon and a short-lived Fox sitcom starring Patrick Warburton as the hero. Now The Tick is back, this time as an Amazon original series starring Peter Serafinowicz as the Tick and Griffin Newman as Arthur. Just like the 2001 Fox version, this latest incarnation of The Tick is a collaboration between Edlund and executive producer Barry Sonnenfeld (the Addams Family movies).

While both the cartoon and the Fox sitcom were delightful, this series definitely feels like the most mature distillation of Edlund’s original creation thus far, mixing the goofball antics of those earlier shows with an unmistakable edge of darkness. This isn’t The Dark Knight by any means, but the stakes do feel a bit more weighty than they did in the earlier versions of The Tick. Some of this is simply because of the freedom afforded by its Amazon home: Characters are free to swear with impunity and there are moments of surprisingly intense violence (especially involving one Punisher-like vigilante with a penchant for knives).

Overall, however, this Tick just feels more grown up than the previous versions. The Tick’s childlike innocence is still there, but it’s even more sharply contrasted with Arthur’s queasy terror at being thrown into this world he’d much rather avoid. Since landing a writing position on Joss Whedon’s Firefly in 2002, Edlund has been working steadily in television on shows such as Supernatural and Gotham, and that extra experience definitely shows here, as well as just the inevitability of Edlund’s approach to his signature creation evolving with age.

Which isn’t to suggest that this isn’t still funny. The Tick himself is still very much the same, because the Tick doesn’t change. He’s still a wide-eyed innocent capable of punching a mugger through a city bus, and completely oblivious to the fact that that guy is definitely now either headed for the hospital or dead. His speeches are still both ridiculous and weirdly inspiring, and it’s still incredibly sweet to watch him try to challenge Arthur to become something greater than the meek victim he’s been all his life (even if those challenges constantly put Arthur in mortal danger). The writing by Edlund, former Buffy writer David Fury, and a few others is sharp, funny, and often bordering on brilliance, as during a sequence where Arthur questions his sanity while an all-kazoo cover of the Pixies’ “Where Is My Mind” plays on the soundtrack. That sort of pitch-dark humor mixed with outright silliness is where The Tick truly shines.

As for the cast, Peter Serafinowicz had an uphill battle before him, but still makes the character very much his own. Patrick Warburton was practically vat-grown in a lab to play the character in the 2001 version, but while he nailed the goofy, clueless optimism, Serafinowicz deftly blends that with a very real sense that there is something seriously wrong with this guy. The Tick never crosses the border into actually seeming sinister, but there’s more of a concerning edge to him this go-round. That’s on display even in how the fights are staged. When the Tick takes on bad guys, he simply slaps them aside like flies. But when he hits them, they fly—they might as well have been hit by a train. The physics of it all is sudden and violent and right on the edge of disturbing, especially when contrasted with the Tick’s own good-natured enjoyment of it all.

Griffin Newman also shines as Arthur, perfectly selling the character’s past scars and present anxiety. This is a guy who wants no part of the superhero world, but who can’t seem to escape it. But he’s also determined to prove that the Terror (unsettlingly played by Jackie Earle Haley) is still alive, because that’s the closest he thinks he’ll ever get to achieving closure. That puts him directly at odds with Yara Martinez as Ms. Lint, a lightning-flinging former cohort of the Terror who treats each day as a new series of annoyances to be endured.

With comic-book adaptations ruling the box office, it’s the perfect time for Ben Edlund and the Tick to take them down a peg. Here’s hoping Amazon’s The Tick continues to deconstruct the cape-wearing bastards for years to come.