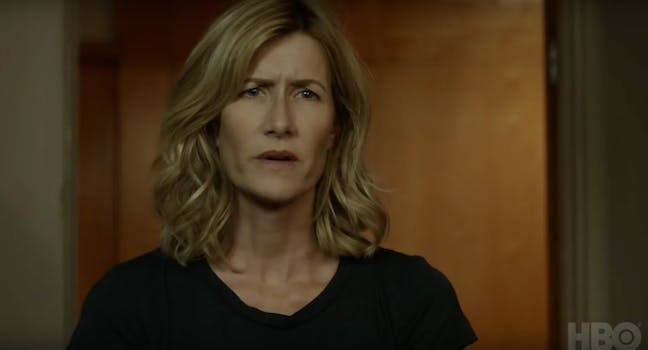 The Tale is very good and you’ll never want to see it again.

Laura Dern headlines the film as Jennifer Fox, a documentary filmmaker who begins to reckon with the sexual abuse she suffered as a child for the first time after her mother (Ellen Burstyn) finds a short story she wrote as a teen. As Jennifer revisits the relationships she had with her childhood riding instructor, Mrs. G. (Elizabeth Debicki) and running coach, Bill (Jason Ritter), the film cuts back and forth between Jennifer’s present and past, using her short story as a bridge between the two. Eventually, her journey leads her to present-day Mrs. G. (Frances Conroy) and Bill (John Heard), and the movie culminates in an unforgettable confrontation which Jennifer has been building to her whole life.

The Tale is taken from real-life filmmaker Jennifer Fox’s experiences, and she wrote and directed a script based off an actual short story she penned at 13. HBO acquired The Tale after it made a splash at Sundance, an almost surprising move, considering it certainly would’ve been worthy of a theatrical release. But if its presence on streaming encourages more people to see it, then HBO’s payout will have been worth it.

There are no dutch angles or low lighting, and the movie’s monsters are not shadowy figures but smiling faces. The Tale has an almost lilting, dreamlike quality, designed to disarm the audience the way Jennifer has disarmed her own memory. The scenes which depict abuse are not shot as scary, in fact, Fox directs these acts in a shockingly frank way, which makes them all the more disturbing. It’s a fitting choice because, despite the movie’s stylistic touches, this is often the reality of these circumstances.

The audience will, of course, see the warning signs, but the dissonance of the material versus how it’s being presented is the point. The Tale is a horror story which plays like a fantasy. The whole movie is about how people think about abuse narratives, how what Jennifer has for so long thought of as a “relationship” was actually rape.

It takes an important step in reclaiming works of titillation like Lolita from the male gaze. When Jennifer first thinks back to this time in her life, she remembers herself as older, more womanly. When she sees a picture of herself at 13, the movie recasts with a younger actress. This sets in motion a series of events which lead Jennifer to look at her story outside a culture which marginalizes young women, and outside the mythology she’s built up as a shield. The secret at the heart of The Tale is that survivors are forced to navigate a society which encourages them to reframe assault as something else.

The cast meets the high bar Fox sets for them at every level. As the younger Bill, Jason Ritter has the difficult task of playing a seducer so unassuming, so conventionally “likable,” the movie asks the audience to perform the impossible feat of forgetting, if only for a second, that he is also evil. Debecki’s role is more challenging still. As the beautiful and ethereal Mrs. G., she’s the complex kind of villain who is also a victim of herself, a master manipulator who was once manipulated. Common and Ellen Burstyn have some very good scenes too, playing the fiance and mother who can’t comprehend the fact that this is Jennifer’s story to reconcile. And Conroy and Heard, in his final performance, are both chilling in very different ways.

Dern especially pulls off a remarkably nuanced performance. Jennifer is restrained and resistant to classification. It’s only in that final confrontation where it all comes pouring out of her, a lifetime of self-denial and marginalization, unleashed as a righteous act of fury. It’s one of the best scenes of the year. It would be great to see HBO screen The Tale in at least a few theaters, in hopes of making her a longshot Oscar contender.

The movie drags slightly in the middle, as the story bounces back and forth between Jennifer’s personal life, her memories, and her quest for understanding. But the conclusion it arrives at makes it all worth it.

This is an intensely personal story, and for Fox to even approach it must have been a daunting and confusing process. The result is a deeply courageous work that demands our attention.