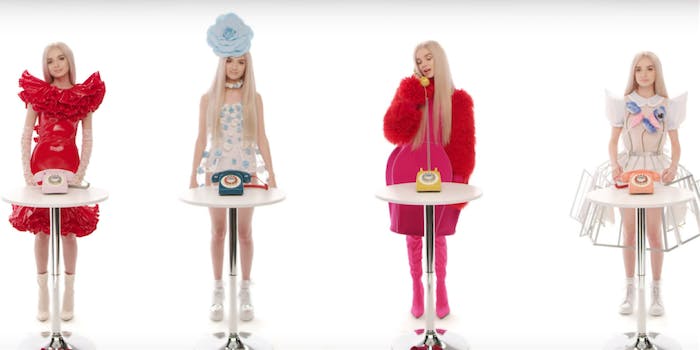 The Rock and mysterious YouTuber That Poppy finally cross paths

The Rock is promoting his upcoming film Jumanji, but in the process, he also elevated a mysterious YouTube star.

On Monday he posted a photo to Instagram and ruminated on being a “punk kid” with big dreams in Times Square, where the billboard for Jumanji now lives.

But another photo caught the eye of Titanic Sinclair, who works with the curious pop-art project That Poppy, a woman of undetermined origin and age who has fueled many conspiracy theories about who she is and what she does. As the Daily Dot’s Jay Hathaway wrote in August: “Is Poppy a puppet of the Illuminati, the shadowy power-brokers who allegedly control contemporary society? Is she a secret government mind control project?  Is she ‘real,’ or just a PR stunt? Is someone forcing her to make YouTube videos against her will? And if so, who?”

We’re guessing the Rock didn’t know That Poppy before this fateful tweet, though he congratulated her anyway. Time to let loose a whole new pack of conspiracy theories about an upcoming Fast and Furious cameo.

Congrats on your first ever Times Square Billboard. Huge! 🙌🏾👊🏾 https://t.co/lA30Op5suQ