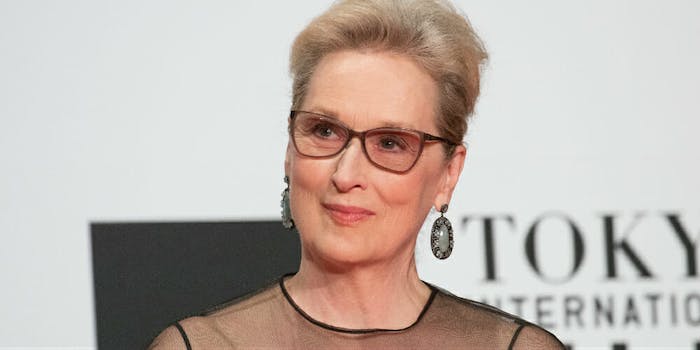 Ryan Murphy just solidified a star-studded cast for the movie musical adaptation of The Prom. Meryl Streep, James Corden, Nicole Kidman, Ariana Grande, and Awkwafina are all set to star in the Netflix film.

Murphy, best known for creating the American Horror Story franchise, is slated to produce The Prom.

In The Prom, Streep’s character Dee Dee Allen teams up with Corden’s Barry Glickman to star in a play about Eleanor Roosevelt. After the play receives scathing reviews, the duo quickly seeks out a way to resuscitate their careers. Eventually, they decide to support a social justice cause, where they meet a young girl named Emma–who is not allowed to take her girlfriend to prom.

Grande will star as a popular girl named Alyssa, while Crazy Rich Asians star Awkwafina will play a publicist.

Murphy is producing the film along with Alexis Woodall, Bill Damaschke and Dori Berinstein. The script is being penned by Chad Beguelin and Bob Martin. Beguelin and Matthew Sklar will be in charge of the lyrics and music–which are based on the original work of Jack Viertel.

The soundtrack will be produced by Murphy, Grande, and Scooter Braun–Grande’s manager.

Murphy signed an expensive five-year deal with the streaming service in 2018. He will also be producing The Politicians, Ratched, and Hollywood as part of the deal. Murphy is also set to adapt another musical, The Boys in the Band for Netflix.

The Prom is expected to be released in the fall of 2020.