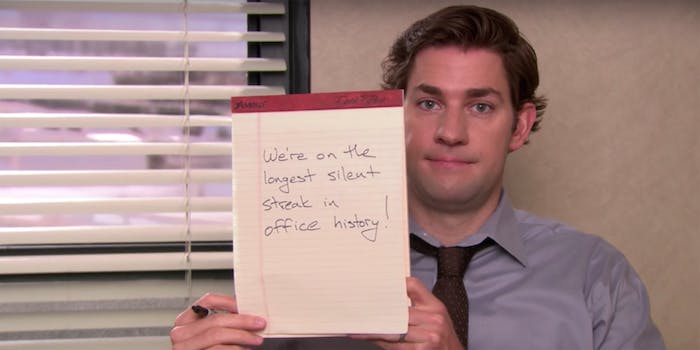 A Quiet Place has had movie-goers on their toes ever since its release in early April. Director and main actor John Krasinski capitalizes on the horror industry’s use of “cinematic silence” but flips the idea, making any sound a source of fear.

But did Krasinski really think he was going to get out of this without a few jokes from The Office thrown his way? That answer should be a hard no. The show ran for a full nine seasons, so people on Twitter had plenty of jokes about silence to work with.

Oh, and there was once a “silent streak” in The Office, which fit perfectly with the theme.

Although Krasinski is following up A Quiet Place with another serious film, a sci-fi thriller called Life on Mars, we will never be able to forget the actor and filmmaker in his first epic comedic role. We may never be able to watch an original episode of The Office with Krasinski again, but the memes make it very clear we’re not over the old Jim just yet.