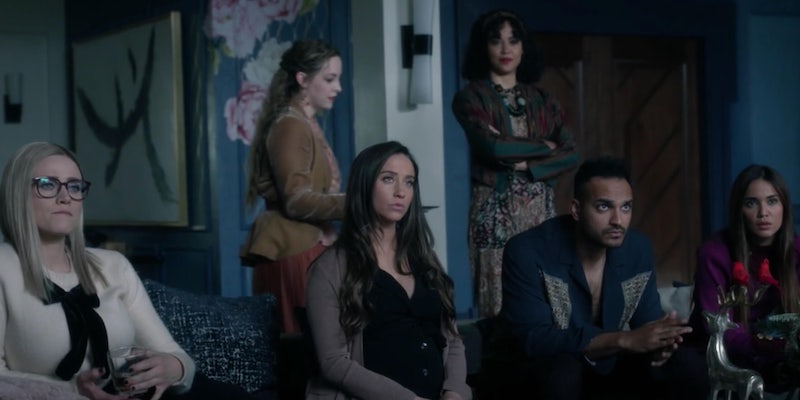 The emotional series finale of ‘The Magicians’ was just about perfect

The characters move beyond Fillory in this satisfying conclusion.

This article contains spoilers for the series finale of The Magicians.

The Magicians ended on Wednesday night with a cathartic and surprisingly hopeful series finale. Most of the (still living) characters received a happy ending or relatively satisfying conclusion, despite the fact that the series was not expected to definitively end at season 5; Syfy just announced that it would not renew The Magicians for a sixth season in early March. The finale was tonally similar to The Good Place’s finale, which aired in January. Like The Good Place, The Magicians ended on an uplifting note and the feeling that the ensemble cast of characters developed into better people, who would now make the world a better place. Or, in the case of The Magicians, better worlds.

The climax of the season finale of The Magicians, “Fillory and Furthur,” centers around destroying Fillory, the magical world that the characters lived in, ruled, and traveled to when they weren’t solving magical mysteries in New York. Since the first season, Fillory was seen as an ideal world where animals talked and the air contained opium. But once the human characters spent more time there—and became its rulers—they discovered that it was not devoid of problems. The only solution? Save all of the people and animals, blow it up, then create a new world.

At a time when everyone is quarantined and waiting to see what our world will look like at the end of this pandemic, The Magicians’ finale is hyper-relevant. While we don’t have the magical capabilities to grow a whole new world from a seed, complete with fields of bacon and natural pizza ovens, it was satisfying to see people willing to do anything to save all the living creatures on one world, yet it also makes you long for leaders who would do the same for us. “Whatever I write with Sera [Gamble] next, it’s going to have a feeling of, the worst thing about a crisis is the person in charge,” series co-creator John McNamara said in an interview with the New York Times.

The Magicians, which is based on the fantasy novels of the same name by Lev Grossman, began airing in late 2015 and immediately sparked comparisons to Harry Potter. Yes, it involved a magical school—Brakebills University—and students who are placed into specific houses based on their magical talents. There was even a “chosen boy” and a Beast, which were vaguely reminiscent of Harry and Voldemort’s connection. The Beast was killed early on (although he briefly returns in the finale) and the Harry-equivalent lead, Quentin Coldwater (Jason Ralph), died in the devastating season 4 finale. But the similarities to J.K. Rowling’s series stopped there. Backed by sharp writing and strong performances, The Magicians managed to step out of the shadow of bigger fantasy franchises and stand on its own.

After Quentin’s death, the series was still great, proving that the death of a major character doesn’t always spell doom for a show. This season also used his death to explore how people deal with grief in different ways—from staying in bed all day to trying to find a way to change the past. Overall, the way the series covered depression, mental illness, and grief was impressive. The fact that Quentin died to save everyone also pushed his friends to work together to save both Earth and Fillory. They didn’t want his death to be a waste. And now we know that it wasn’t. They did it.

The Magicians was a uniquely weird show that was designed for a niche audience, one that would get references to other, more popular fantasy shows as well as general pop culture. The fact that it lasted for five seasons is an incredible gift. The characters, all well-developed with their own arcs, received the endings they deserved. Alice (Olivia Taylor Dudley), Josh (Trevor Einhorn), Fen (Brittany Curran), and Margo (Summer Bishil) are given the blank slate of a new world, with Margo the Creator (formerly known as Margo the Destroyer) in charge. Eliot (Hale Appleman) is given a chance for a relationship that—for the first time in a while—won’t end with the man he loves dying or trying to kill him. Julia (Stella Maeve) and Penny (Arjun Gupta) create a child that conveniently allows them to travel to other worlds. And Kady (Jade Tailor), who deserved a larger part of the story this season, is seen continuing to lead the hedge witches. “Fillory and Furthur” ends with a shot of Margo smiling with the uncertainty of a new world hanging in the air. It’s a near-perfect finale for one of the best TV shows in existence.

Seasons 1-4 of The Magicians is streaming on Netflix, and season 5 is available on Hulu.