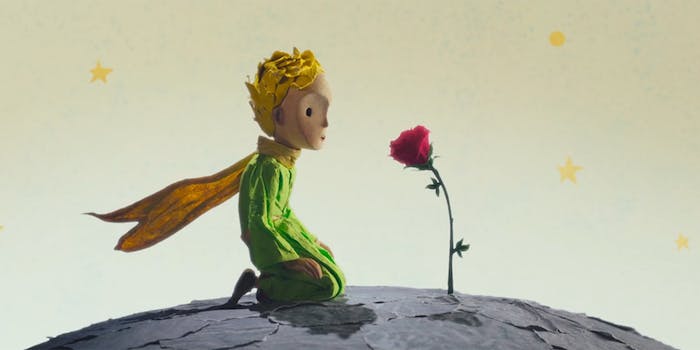 Screengrab via The Little Prince/Netflix

The Little Prince captures the heart of the beloved children’s story in gorgeous stop-motion animation, but it also tells a captivating human story off the pages in a much more modern world.

For many viewers, this version of The Little Prince directed by Mark Osborne, was already familiar. Its journey took it around the globe as it earned millions at the box office and won a César Award (basically the French Oscars). However, it took longer to finally land in the U.S.: Shortly before it was supposed to debut in American theaters, Paramount Pictures quietly dropped the film from its schedule. Netflix then swooped in to handle the film’s distribution.

And from the very first trailer, it was evident that something a little magical occurred as it effortlessly blended the computer animation of the real world with the storytelling of the Little Prince’s story, which looks like it’s ripped straight from the pages of author Antoine de Saint-Exupéry’s book. It’s telling a modern story with a young girl at the front of it—a rarity in film that’s becoming a little less so these days—but The Little Prince embraces its roots; the book’s iconic cover even makes an appearance.

Instead of creating a straightforward adaptation of The Little Prince, the original story exists as one within the film courtesy of flashbacks: the Aviator (Jeff Bridges), now an older man, shows his pages and illustrations, which fans will recognize from the book itself, to the Little Girl (Mackenzie Foy). She’s supposed to devote every minute of her summer to studying and preparing to attend a prestigious academy, but she ends up connecting with the Aviator as he reveals a little more about the Little Prince, who he encountered as a younger man, each day.

The animation styles distinguish both the Little Girl and the Prince’s stories up until they blend together, but the film’s use of color in the present also sets the tone. The very neighborhood the Little Girl and her mother (Rachel McAdams) move into is full of identical gray houses with indistinguishable neighbors who go through the same routine every day. The Aviator is the exception to this with a house full of vibrant colors; his house is so eccentric that the Little Girl’s mother is able to purchase the house at a reduced price because of it.

The portrayal of being a child and adulthood in this world is cut clearer than even the book in the Prince’s encounters with the King, the Conceited Man, and the Businessman (who all make appearances in this telling). The eventual conflict of what happens when happiness and “inefficient” things are taken out of everyone’s lives—as some familiar faces are sucked into a joyless monotony—is particularly affecting.

The message may be heavy-handed at times, but the spirit of the original story shines through, and it proves that animation is a perfect vehicle in which to tell it. It conveys a certain magical beauty as both worlds collide and the Little Girl is unsatisfied with the end of the Aviator’s tale.

“It is only with the heart that one can see rightly,” the fox, voiced by James Franco, tells the Little Prince. It’s that heart that’s made The Little Prince timeless—and why it resonates now more than ever.

The Little Prince is now streaming on Netflix.

Correction: The girl in the film simply goes by “the Little Girl.”