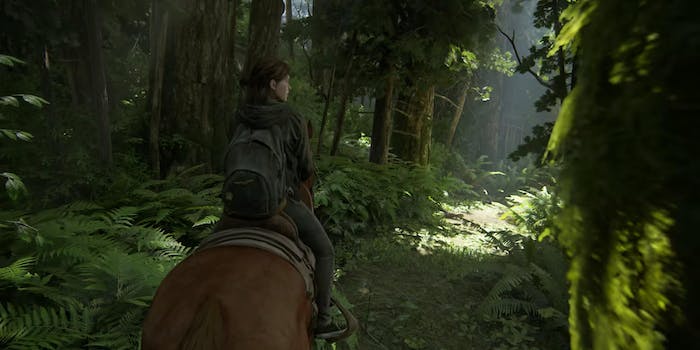 This game is going to absolutely wreck us.

The much-anticipated sequel to Naughty Dog’s incredible 2013 release, The Last of Us, is almost here.

We’ve been eagerly awaiting the next chapter in Ellie and Joel’s story for ages. Fans of the first installment have been gobbling up every tidbit that the internet has to offer, which at this point amounts to quite a lot. With leaks and spoilers all over the internet, however, cautious fans are hesitant to look too deep. Here is everything we know about The Last of Us Part 2, with absolutely no story spoilers. Promise.

The Last of Us Part 2: What to expect

If you’re here, rather than digging through a leak-riddled Reddit thread, then you probably aren’t looking for any hints as to what the story will offer. Trailers have revealed just enough to get fans deeply excited for the sequel, which promises to offer just as much violence, heartbreak, intrigue and deep, intricate emotionality as the first. Here’s the latest trailer, released earlier this month.

One thing that we know for sure is that the game if it is anything like its predecessor, will be gritty, emotional, and harrowing. It will likely allow its character relationships to drive its purpose, and it will create a narrative around violence and its perpetuation. It’s definitely going to get gory, but it will never leave its sentimental roots far behind.

This game is going to absolutely wreck us. I can’t wait.

The Last of Us Part 2: Release date

With The Last of Us 2‘s release date flip-flopping all over 2020’s early months, no one will blame you if you’re confused. The initial release date had the sequel arriving near the end of February 2020. In December 2019, however, developers pushed the release back to May 29. The minor delay, even after years and years of waiting, was taken in stride by most fans.

Then, on April 2, Naughty Dog announced that while the game was nearly complete, it would again be delayed due to complications caused by the COVID-19 pandemic. It referred to this delay as “indefinite,” and fans were petrified. After seven years of waiting, they had no definite timeline on when to expect the game.

Thankfully, as fallout from the pandemic eased, developers pulled back on that “indefinite” time frame and, finally, gave an official release date. Assuming no more issues arise, The Last of Us Part 2 will officially hit shelves on June 19.

The Last of Us Part 2: Size

Eager gamers might have to make some space on their systems before downloading The Last of Us Part 2. That’s because this game will clock in at a staggering 100 GB in size. The PlayStation 4’s largest game yet, it’s going to take some serious space to handle this puppy. The game will have two disks, one to install the game, and one for actual gameplay.

The Last of Us Part 2: Setting

The first game was set between Boston and Salt Lake City. According to the sequel’s director, Neil Druckmann, a “large part” of The Last of Us 2 will take place in Seattle.

Given the wandering nature of the first game, it seems certain that the second game will eventually deviate from its far-northern setting. At least a few of the states directly around Washington will likely make an appearance over the course of Ellie’s journey. Oh, and don’t forget: The story takes place a full five years after the first game.

The Last of Us Part 2: Gameplay

Given that this game places Ellie in the primary playable role, rather than Joel, we can expect the gameplay to be a bit different. Without Joel’s mass and strength, combat is going to change pretty drastically. Players got the chance to play as Ellie during the Winter segment of The Last of Us, so we’re somewhat familiar with the differences in style. Ellie is much older than she was in the last game, however, and she’s sure to have learned a few things along the way.

Trailers indicate we’ll see Joel’s strength and durability traded for greater agility and speed in Ellie. Up-close-and-personal combat will likely amount to a death sentence for Ellie, but your ability to dodge and work around obstacles is sure to get a boost.

Trailers have revealed a few changes to gameplay, like Ellie’s ability to throw objects mid-sprint. They’ve also indicated that Ellie’s superior agility will allow for far more levels to be used, as she can climb and squeeze into far more places than Joel. The mechanics around stealth have also been massively upgraded, creating a far more dynamic—and likely challenging—experience.

The Last of Us Part 2: Characters

We won’t dive too deep into which characters will show up in The Last of Us 2, as spoilers would be unavoidable, but an important question must be answered: Will the game still follow Joel and Ellie?

The short answer to this question is yes. The game will still feature both of the beloved characters from the original, despite the five years that have passed since that story concluded. We have very little context—spoiler free, at least—about how heavily Joel will factor into gameplay, but he will definitely make an appearance.

Trailers promise a few new characters, as well, but in the interest of avoiding an excess of information, I’ll leave it at that.