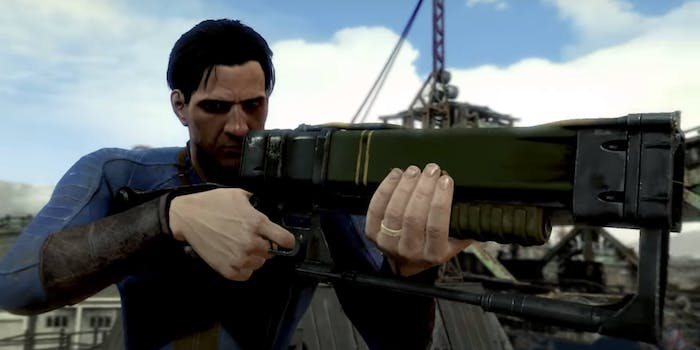 The best Fallout 4 weapons—and where to find them

Warning: These require some serious legwork to find. But they're worth the effort.

Many gamers are taking a break from their own IRL apocalypse to instead take a trip through Bethesda’s version of the end times. Fallout 4‘s empty streets and abandoned businesses offer a very different doomsday scenario, this one awash with raiders, super mutants, and radiation-soaked ghouls at that.

Even if this isn’t your first foray into the wasteland, Fallout 4 is full of surprises. Bethesda’s sprawling world offers up enough side-quests, armor types, and weapon builds to keep even veteran players guessing. Many of the weapons you find in-game are sub-par at first, but can be updated to include devastating abilities.

If you’re willing to put in the effort, however, there are a few base Fallout 4 weapons that will literally blow your enemies away. These can be found throughout the Commonwealth, and often require some serious legwork to obtain. Here are the best Fallout 4 weapons.

Fallout 4 offers up some prime weapons, so long as you’re willing to put in the work. Many of these require several quests to be completed before you can snag them, but I promise it will be worth it.

You can choose to approach Fallout 4 in a variety of ways. If you’re looking to blast the limbs off that Super Mutant or bomb an entire compound, however, you’re going to need a firearm. Some of Fallout 4‘s best weapons rely on non-traditional or difficult-to-find ammunition, however, so choose wisely.

Aliens are far from a common sight in the Commonwealth, but one unfortunate extraterrestrial can be discovered with some exploration. Pretty early in the game, keen-eyed players will notice an object hurtling across the sky. Following the smoke trail will lead them to a crash site south-east of Oberland Station.

There, you’ll find the ill-fated martian. If you’re quick, he might even still be alive. Unfortunately, if he is still drawing breath he’ll engage you in combat. Once he’s down, you can loot the Alien Blaster from near his corpse. The otherworldly gun packs some serious punch, but its ammo is in short supply. Consider modding the gun to allow the use of more common ammunition.

One of the biggest issues with Fallout 4‘s most powerful weapons is access to ammunition. This problem is absent with Deliverer, a superb weapon that can be obtained pretty early on and uses blessedly plentiful 10mm ammo. Find it by pursuing the Railroad questline.

This baby can fire shots off like nobodies business. Its respectable damage instantly turns devastating when used in VATS, where you can riddle your enemies with bullets in an instant.

If you’ve spent a few hours on Fallout 4‘s main storyline, Kellogg’s name should be familiar. You come across this character relatively early in the main quest, which gives you plenty of time to enjoy the loot you’ll claim off him.

Kellogg’s Pistol is a powerful, sleek .44 magnum. It provides adequate range with one hell of a kick, and the added bonus of a critical hit refilling your AP makes it nearly unequaled in VATS. Unfortunately, .44 ammo is not overly abundant in the Commonwealth, so you won’t want to whip it out for just anything.

I did my best to avoid DLC on this list, but a few of the weapons that came with these additions were too good to pass up. The Kiloton Radium Rifle is one such weapon, with radiation damage and explosive rounds stacked on its already impressive 36 damage per shot.

To obtain this enviable semi-automatic weapon, head over to the Children of Atom at the Nucleus. Brother Kane will offer it up at the exceedingly low price—particularly when compared to other weapon purchases—of 500 caps.

There aren’t many shotguns on this list. That’s because just about any shotgun, once properly upgraded, is indistinguishable from most other Fallout 4 shotguns. But nothing you cook up at a workbench will compare to Le Fusil Terribles, which can load a whopping 32 shells at once and deals out devastating damage, particularly to limbs.

This weapon, which translates to “the terrible gun” or “the terrible shotgun,” more specifically, is an item you absolutely want to possess. It can be found in a raider outpost called Libertalia to the northeast of the airport. Make your way to the very top, and this glorious weapon will await you in the captain’s quarters.

The Nuka-Nuke Launcher is almost certainly the most powerful Fallout 4 weapon, but unfortunately can only be obtained if you own the Nuka-World DLC. If you’re operating without this expansion, consider the Big Boy as a solid replacement.

Nuka-World owners get the distinct privilege of owning this devastatingly powerful mini-nuke launcher. This weapon uses a modified version of the handheld nukes you’ve grown accustomed to, allowing it to deal out far more damage. This weapon is utterly useless up close—unless you like watching your limbs fly off in a gory display of literal self-destruction—but can wipe out an entire enemy camp in a single blow.

For players who prefer to deal damage from a distance, Overseer’s Guardian is an absolute necessity. It will cost you a pretty penny—around 3,000 caps—but its armor-piercing receiver and night vision scope will transform you into an elusive ghost. You can take down an entire encampment from a distance, in the dead of night.

The original weapon even fires off two shots for the price of one, potentially doubling your damage output. Add a few mods, and transform this gun into something nigh-unbeatable. In order to get access to Vault 88, where you can buy it from Alexis Combes, you’ll need to sweet-talk your way through security or come prepared with three fusion cores.

Like the Nuka-Nuke launcher, this weapon requires DLC. If you don’t have Nuka-World installed, might I recommend the Spray n’ Pray? It is an enviable machine gun you can purchase from Cricket, a travelling merchant.

If you do have Nuka World installed, the Splattercannon is the perfect weapon for mid-range encounters and large groups of enemies. It deals 49 damage, but that stacks with every consecutive hit on the same target. It is an excellent choice for players going up against foes with staggeringly high health. Whip this gun out next time a Deathclaw catches your scent and your chances of survival will skyrocket. You can purchase it off Aaron Corbett in Nuka Town, but it will cost a pretty penny.

If you’re looking to crack skulls rather than blast off limbs, you’re likely on the hunt for a melee weapon. While these up-close-and-personal weapons won’t result in the same kind of devastating destruction as a Fat Man, they can still off a legendary enemy in a single blow.

The Children of Atom offer up several powerful, radiation-soaked weapons. Arguably the most powerful melee weapon Fallout 4 has to offer, Atom’s Judgement can only be obtained after you make the trek down to the Nucleaus. If you don’t have the Far Harbor expansion installed, a heavily upgraded Super Sledge—which is exactly what this weapon is—will make a suitable replacement.

If you do have the DLC, however, Atom’s Judgement is well worth the quest you’ll need to complete to obtain it. Polish off “the Heretic” quest and you’ll be rewarded with this beast of a melee weapon. On top of its 315 damage, this baby pumps out 787 additional radiation damage over time.

Fallout 4 offers only rare opportunities to exchange fisticuffs. Your enemies tend to possess too much firepower to allow for overly close combat, and your fists can only deal so much damage. Unless you have the Furious Power Fist equipped.

This glove can only be obtained by defeating Swan—you know Swan—and looting it from his body. New players should probably wait before they engage this hulking Super Mutant Behemoth. The eventual fight is well worth the Furious Power Fist’s 57 damage—which increases each time you strike the same enemy.

Even if you’re not going for a melee-heavy play through, a reliable melee weapon is always a good idea. You never know when you’ll eat through that last clip and suddenly be in need of defense. One of the easier to find, and solidly effective, close range Fallout 4 weapons is Grognak’s Axe.

This weapon can be located in a locked case in Hubris Comics. The shop is absolutely swarming with ghouls, so make sure to enter prepared. With no quest to obtain it and its combined damage ratio and stagger ability, this axe is an excellent choice for low-level players.

One of dozens of nods to H.P. Lovecraft in Fallout 4 comes to us in the form of a wicked-looking blade. This sacrificial knife can be found in yet another Lovecraft nod, beneath Dunwich Borers near the Museum of Witchcraft.

Kremvh’s Tooth deals 49 damage, which is only enhanced by its added bleed and poison effects. The knife, one of only a few lingering artifacts from before the Great War, is a particularly good choice for stealthy players.

There are a few weapons scattered throughout the Commonwealth that pack some serious punch, but rely on such specific ammunition or circumstances that they can’t really be considered among the game’s best weapons. Still, these armaments offer up enough interesting, creative or straight-up catastrophic results to deserve a place on this list.

The very first weapon most players come across in Fallout 4 is located behind a locked case in Vault 111. You’ll need to be a master level pickpocket or bring along Dogmeat—or Cait, if you’d prefer—to fetch the weapon for you. The Cryolator pumps out rounds that would make Mr. Freeze swoon, but is by no means the handiest Fallout 4 weapon.

That’s because Cryo rounds are incredibly difficult to come by. Still, it packs some serious heat and boasts some excellent aesthetic effects. Modifying your Cryolator will allow for the use of different ammo, which should be an early step for anyone hoping to lean heavily on this gun.

If a gun’s look could intimidate enemies into surrender, this weapon would absolutely do the trick. Final Judgement is definitely not for a player hoping to sneak their way through encounters, but might just be the perfect choice for less subtle players. You can obtain it by pursuing the Brotherhood of Steel questline.

This Gatling laser can pump out round after round at terrifying speeds, each one worth 26 damage. Unfortunately, its use of Fusion Cores—the same things that enable your Power Armor—makes it an extremely expensive weapon to operate.

Gamma guns can be irritating to use, primarily because their blasts of radiation are erratic and difficult to aim. Lorenzo’s Artifact is the exception to this rule, but is at its handiest in very specific situations. While it’s still nearly impossible to get a precise shot from this weapon, it can come in immensely handy against Mirelurks and Sentry Bots, in particular.

With a few mods installed, this gun can suddenly transform into one of the most versatile in the game. And since Lorenzo’s Artifact is itself a mod, it can be removed from its Gamma Gun base and placed on another weapon. To obtain it, you’ll need to speak with Edward Deegan, a ghoul you can come across in Bunker Hill or at the bars in Diamond City and Goodneighbor. He will introduce the first in a series of quests that will ultimately lead you to Lorenzo’s Artifact.

It doesn’t make the most sense in a large-scale battle, but this simple-seeming weapon has a huge perk. It can send enemies of all shapes and sizes—even Deathclaws—soaring.

It isn’t going to deal the same damage as any of the other weapons on this list, but you know you want to see it in action. You might even die for your effort, but is a Deathclaw in flight not worth the risk? Track down the bat used to win the 2076 World Series in the basement of Jamaica Plain’s town hall.