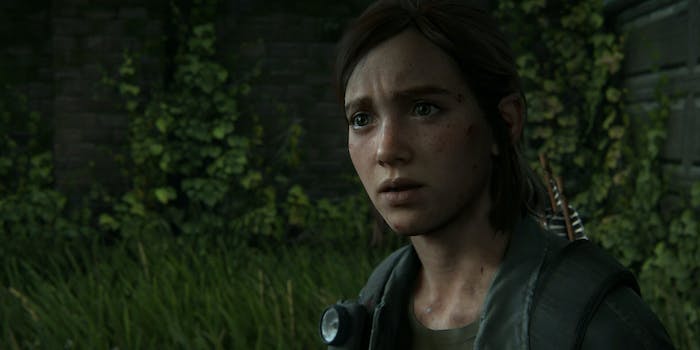 Several big plot points are part of the alleged leaks.

Major spoilers from The Last of Us Part II (the sequel to the acclaimed 2014 PlayStation game) have circulating online, revealing several alleged details about the highly anticipated sequel.

The leaks appeared on YouTube over the weekend but have since been uploaded and shared on other websites like Twitter. While the authenticity of the footage and leaks have yet to be confirmed by Naughty Dog, it appears that the footage is authentic; the clips feature voices of the actors who portray those respective characters in the game.

The Daily Dot has reached out to Naughty Dog for comment.

Information on what exactly is revealed is easily accessible—and many of the cutscene videos are still online. The leaked portions of the game include game footage, cut scenes of both character beats and major fights, character deaths, major plot points, and information on gameplay and the main menu. (One screengrab shows what looks like a level list has also been shared.)

Today, Sony announced that The Last of Us Part II will be released on June 19.

Update 1:42pm CT, April 27: Naughty Dog acknowledged the existence of the leaks for The Last of Us Part II in a statement. The developer offered assurances that the game will be worth the wait while asking fans not to spoil other people on what might be out there.

“We know the last few days have been incredibly difficult for you,” the developer said. “We feel the same. It’s disappointing to see the release and sharing of pre-release footage from development. Do your best to avoid spoilers and we ask that you don’t spoil it for others.”

“The Last of Us Part II will be in your hands soon,” Naughty Dog continued. “No matter what you see and hear, the final experience will be worth it.