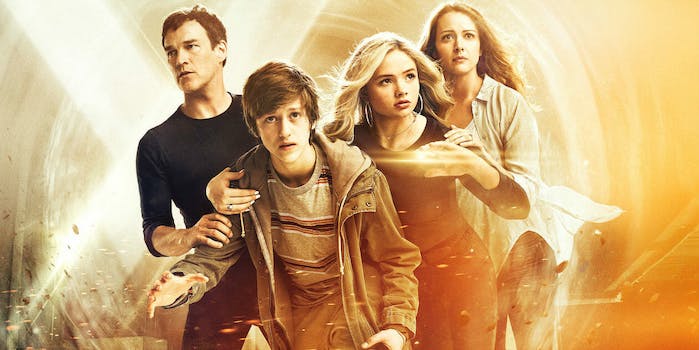 Amid the gamut of comic book adaptions that are expected to premiere within the next year, Fox has already found a dedicated following with its first attempt Legion on FX and is back for even more of the pie with The Gifted, which premiered last week. After watching the first few minutes, it’s obvious the network has paid attention to the criticism other shows and Marvel have received about the lack of diversity, plot, and storytelling.

The show gets off to a jumbled start that quickly introduces several characters with little context before we get to the Struckers family, a comfortably upper middle-class family of four that’s as generic as they come. Viewers are first introduced to Caitlin, the nice suburban stay-at-home mom and Reed, who prosecutes mutants for the government. That’s followed by the introduction of their kids—Lauren, the typical pretty girl comfortably placed in the high-school pecking order, and their bullied younger son, Andy, who’s a social outcast. Their idyllic life is upended after a gang of bullies trigger Andy’s powers, causing the school to collapse. When Lauren rushes to rescue her brother, she inadvertently reveals her powers. The family then goes on the run after the Sentinel Services come to take the children away.

Throughout this set-up, the show’s writers drop enough subtext that conveys the state of this universe. The X-Men and The Brotherhood have disappeared. Mutants have been left to fend for themselves in a society that shuns any individual exhibiting supernatural capabilities. Most are fugitives being tracked on a nationwide (and perhaps a global) scale through a database that could soon become even more deadly with potential implication of X-gene testing looming on the horizon.

Where the episode falls apart is it’s on-the-nose dialogue, riddled with cliches and weak metaphors. It relied a little too much on give-and-take driven sequences where I felt like I was watching the actors count one beat for the other to finish talking before saying their line. None of the actors really grabbed my attention or made me interested in learning more about them.

Unlike run-of-the-mill cops that the X-Men typically dealt with in the movies, the Sentinel Services is an FBI-like arm of the federal government that’s sole purpose is to capture mutants. From the brief glimpse of anti-mutant technology that was shown, it’s clear this secret service is not a group the mutants can easily brush off. They are frightened by them and don’t confront them head-on unless necessary.

As a long-time X-Men fan, I was most worried about how the show would bring their powers to life. Although this episode is light on fight scenes, each power fit in seamlessly from a visual perspective. The first time Lauren used her powers, I didn’t notice she had done anything until she used them again to stop a pole structure from falling on a set of students. It was refreshing to watch the show and see that showing off the mutant’s powers wasn’t the only thing it had going for it.

All told, the premiere is promising given the source material the showrunners have to work with and the expansive nature of television that gives them time to set up a new universe and to better introduce characters. It’s not not a particularly good episode by itself but the storyline is cohesive and buildable. The show’s universe and timeline departs from what was previously established in the films prior to the franchise’s reboot with Days of Future Past. As of now, this show is a stand-alone entity featuring new X-Men such as Polaris and Thunderbird in addition to original characters like the mutant Eclipse.

Whether you’re an X-Men fan, this show is definitely worth watching if you’re looking for a superhero TV show that expounds on a story that hasn’t been covered before. Given time, I think the writers can build stronger characters and a more intriguing story. With all of this combined and Bryan Singer, who directed two successful X-Men films, at the helm, the show’s potential is promising.