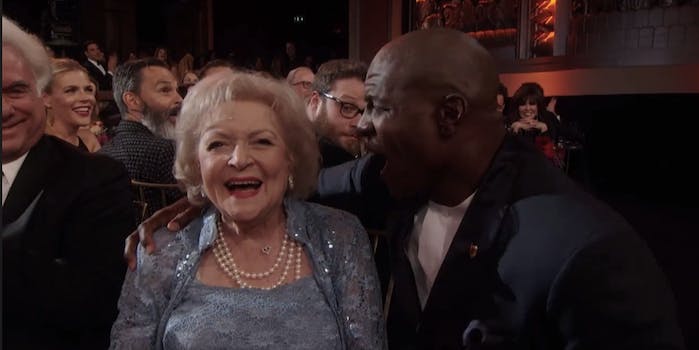 Celebrity lip syncing is really having a moment.

Terry Crews saw an opportunity to get up close and personal with Betty White, and he went for it.

While hosting the TV Land Awards, the former football star/current Brooklyn Nine-Nine actor and all-around renaissance man lip-synced a medley of classic TV theme songs. When The Golden Girls theme rolled around, Crews went right for the star herself in the audience and proceeded to serenade her. He even finished the moment with a chaste kiss on the cheek.

The best surprise? Seth Rogen was seated right behind White, so he turned around and was perfectly framed between their faces. Now that’s a dream sandwich to end up in the middle of. Lucky you, Rogen!