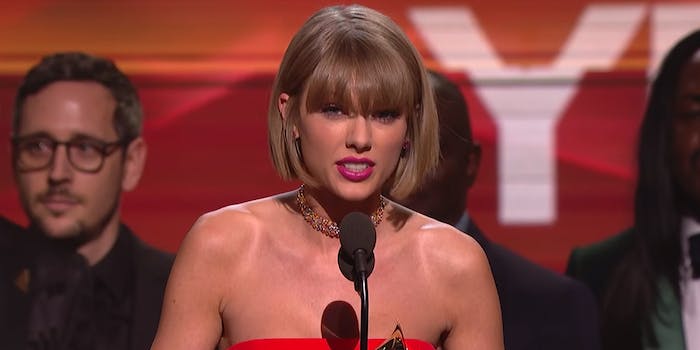 Why no one believes Taylor Swift

Kim Kardashian's Snapchat videos are a big problem for Swift.

No one has been under a Twitter dogpile quite like Taylor Swift was last night. After Kim Kardashian posted Snapchat videos of her husband Kanye West getting Swift’s OK for the opening lines to his single “Famous”—contradicting Swift’s apparent umbrage at the song—one of the great queens of social media found herself the target of the #KimExplosedTaylorParty.

Posting the video is a strategic strike against Swift, who has held onto a feud started with West’s famous interruption of her acceptance speech at the 2009 MTV Video Music Awards. It challenges much of Swift’s public persona as authentic and humble, instead revealing a side of her many assumed was behind her aw-shucks curtain—the savvy, calculated, and opportunistic pop star whose control over her image has made her a giant and unhindered success.

Swift first criticized West’s lyrics (“I feel like me and Taylor might still have sex/Why? I made that bitch famous”) at this year’s Grammys, warning prospective starlets that “there are going to be people along the way who will try to undercut your success or take credit for your accomplishments or your fame.” Kardashian defended her husband’s lyrics just last month, telling GQ that Swift “totally gave the OK” to West and that there was even video footage of the summit.

“When I get on the Grammy red carpet, all the media is going to think that I’m so against this, and I’ll just laugh and say, ‘The joke’s on you, guys. I was in on it the whole time,’” Kardashian told GQ, presumably quoting Swift. “And I’m like, wait, but [in] your Grammy speech, you completely dissed my husband just to play the victim again.”

Swift supposedly demanded the video be made public while West claimed he had received a legal order from Swift’s attorneys to do exactly the opposite.

It’s the kind of internal celebrity drama that might bore someone outside of a tabloid, but the video’s proven existence means Swift—one of the biggest success stories the music industry has had in years—is prone to fraud.

This story wouldn’t stick if it didn’t confirm suspicions critics have had about Swift for most of her career about her carefully designed, authenticity-driven aura. As much as Swift attempts to “play the victim,” she exerts an unprecedented amount of control over her public image. As pointed out by Chuck Klosterman in his profile of Swift, she manipulates her listening audience into conflating her music and her personal life in a way few other pop stars have been able to accomplish.

It’s a careful trick that requires one believe in Swift as a person—you must buy into the story that Swift, as Klosterman puts it, is “experiencing (and interpreting) how her insane life would feel if she were exactly like the type of person who’d buy a ticket to this particular concert.” She needs to appeal simultaneously competent and fabulous while retaining a down-home appeal. The less casual she appears—the more it’s revealed she’s carefully designing a persona—the more difficult this becomes to accomplish.

Take, for example, the regular guest appearances on her 1989 World Tour or her #girlsquad promotion of female friendship through her Instagram feed. The carefully posed photos of Swift with models and fellow performers exhibit a fantastical lifestyle—which is terrific. Much of Celebrity Instagram does the same. But only Swift attempts to sell it, in the words of Jon Caramanica, as “the healing power of female friendship.” If she’s selling her fight with West like a product, she does the same with her friendship.

As she does with #girlsquad, however, Swift regularly deflects criticism by claiming her motives are purely to promote feminist ideals. When Nicki Minaj criticized the music industry for using mostly white backup dancers, for example, Swift responded by citing Madeleine Albright’s famous line about “a special place in hell for women who don’t help other women” and suggested Minaj was merely trying to pit women against other women—effectively suggesting to Minaj that all dancers matter.

Swift lacks an intersectional point to her defense of gender equality. Everyday Feminism called out Swift for exemplifying “white feminism,” a specific term defined as “a feminism that assumes white (cis, straight, able-bodied, thin, middle-to-upper class) women as the default, actively avoiding critical analysis on any axis other than gender, thereby leading to a cookie-cutter feminism that can only possibly be useful to those it’s intended for: white women.”

Swift’s deflection—or silence—on such criticism is, like her designed public production, purely meant to be self-serving. They’re attempts to push aside honest commentary on her work and her place in the industry as merely the words of “haters” looking to stop her (profitable) mission of female empowerment. It calls to arms her hordes of loyal fans while never forcing her or them to ask serious questions about, for example, her past offenses of cultural appropriation.

It’s a debate that’s surrounded Swift in recent years, but not enough to break through the veneer of small-town humility that has made her such a success. Swift clings to the appeal of her early music even as she leaves behind country twang and boys slamming screen doors. The unostentatious sound and feel of an album like Fearless—recorded when Swift was just 19—made her lovelorn lyrics about broken hearts come across as genuine.

It’s a hard act to keep up when you’re one of the last platinum artists in the industry, performing in stadiums with a literal runway as a set piece. Yet she often seems openly shocked at her success. Swift famously puts on a mask of complete shock with each award she wins, as if you can still be surprised after your 10th Grammy.

It’s not a crime to be successful. But after more than eight years of watching her play this act, it’s become an unavoidable fact of Swift that she consciously tries to appear as if none of her victories are expected, all in an apparent bid to deceive a base that desperately wants to be her.

Kardashian’s footage of Swift is damaging not so much due to the facts of the case (celebrities manufacture feuds all the time). The reason it stands to do real damage to Swift is because it confirms the suspicions many already have of her.

Swift still holds a massively loyal fanbase, and the numbers of her record and concert ticket sales predict a healthy future. This isn’t Milli Vanilli—the music is still hers. But as much as lip-syncing could disprove the talent that’s for sale, getting caught in a scheme when your entire brand is honesty can make for a career-threatening poison.