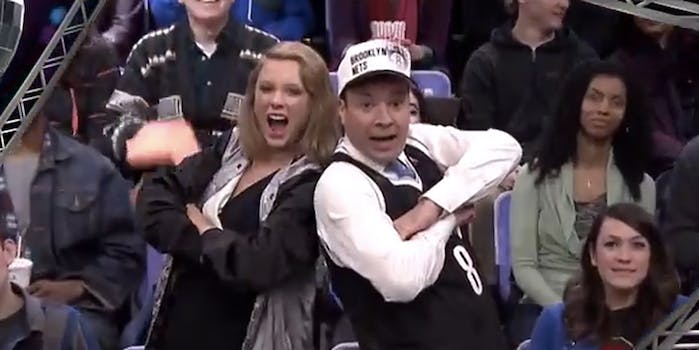 Fallon calls out Swift for dancing with other people when it was really their "thing."

Taylor Swift and Jimmy Fallon are two of the biggest names in show business—and two of America’s biggest goofballs. That’s why it made perfect sense that, during Swift’s Tuesday night appearance on The Tonight Show, the two would produce an incredibly silly video—silly even by late night show standards.

Swift is known for her enthusiastic dance moves, but Fallon claims it used to be just their “thing.” To drive his point home, he gathered jumbotron footage (i.e. footage filmed in the studio earlier that day) of the two buds hamming it up at New York sporting events.

The New York Islanders are having a moment in the sun thanks to Long Island mom Joy Rosen’s sexy confession at Monday night’s game, so they decided to capitalize on Fallon and Swift’s jumbotron outburst by issuing a statement.

We usually only see hot fan-on-fan action like this in the #Isles parking lot, @jimmyfallon – http://t.co/nkdepYVpjS pic.twitter.com/6IFl5UY542

The Islanders have a blank space, baby, and they’ll write Taylor and Jimmy’s names.