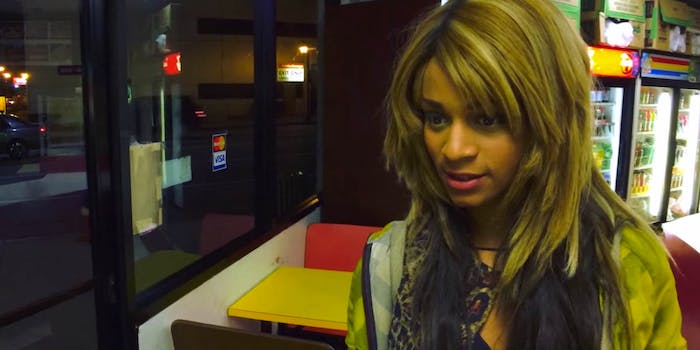 Brought to you by an iPhone 5.

Tangerine, the first feature film shot on an iPhone (with a wide release, at least) was an unlikely breakout hit at Sundance in January, with a whole lot of people talking about the film’s positive buzz at the festival. Now we finally have more than just this picture to go on.

Well, that’s pretty impressive, and not just because it was shot on an iPhone. After factoring in a plot that involves a transgender sex worker (Sin-Dee) getting out of prison and seeking out the cisgender woman her pimp has been cheating on her with, you completely forget about the whole “shot on an iPhone” aspect. It doesn’t appear to be a gimmick; it’s just an unlikely tool that was used to bring this awesome-looking story to the screen.

If the plot isn’t enough to get your attention, it also lacks any known actors whatsoever (which is always really fun), and was produced by the Duplass brothers, who know a thing or two about making great films with unknown faces.