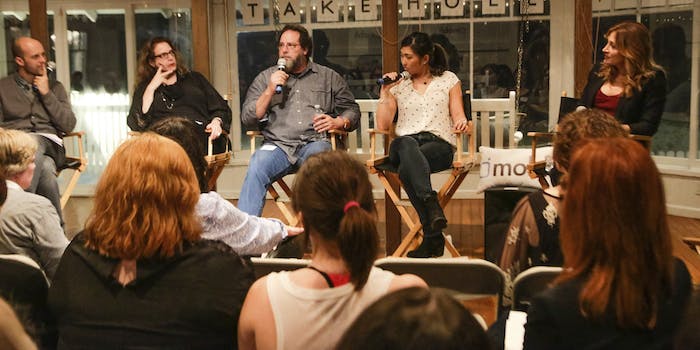 Actors answer the questions they say nobody ever bothers to ask.

A new site promises to tell you everything you ever wanted to ask about Hollywood, straight from the people who power the entertainment machine.

It’s not gossip, however. TakeHollywood aims to put the focus back on the craft of creating, serving as a resource for the acting community, although the site could be enjoyed by any aficionado of theater and film. Each week TakeHollywood launches short-form video interviews with luminaries in the field on a variety of topics essential to aspiring and working actors. The talent ranges from director Rob Marshall to screen legend Sophia Loren.

“It’s freemium,” explained CEO Yasmin Naboa. “Every week when we launch content, there will be some that’s free and some that’s paid. This week we launched Seth Green, who’s paid, but Christina Applegate is free.”

Video content online has been creeping into the paid space, particularly with the launch of Vessel this year. At $9.99 a month, TakeHollywood sports a higher price point, but the content is also highly specialized. However, TakeHollywood is keeping some of its content completely free: its original series. The primary series is The Bulbar Method, a look at acting classes meant to lighten the mood. Fans at TakeHollywood’s launch event got a live taste of the antics the series promises, but for now there’re just teasers online for the sketches.

“One of the things we’re trying to do is promote creativity,” explained Naboa. “[Cofounders] Edoardo Ponti and Sasha Alexander knew [star of the series] David Fickas from USC film school days. It’s also the satire part. … You have to be able to laugh at yourself during this process. I think it lightens the situation when you have that humor.”

The site is also hoping to build community, in part by taking things offline for open discussions. In that spirit, the site’s launch event was held at Venice’s Mobli Beach House, and several established talents from behind the scenes and onscreen spoke candidly about the work of acting.

“What I’ve been missing so much in the last couple of years is being in [the creative] conversation,” explained April Webster, a casting director who most recently worked with J.J. Abrams on the new Star Wars film. “Not talking about how much money this will make. I remember as a kid working in the theater in New York, we’d all go out after the shows, and guess what we would talk about? The theater. That was such an exciting conversation to be in. If you want to be in the arts, you have to be around artists.”

The panelists also spoke honestly about the love-hate relationship working actors have with social media.

“It’s a responsibility,” said Jenna Ushkowitz, who’s currently starring on Glee. “As celebrities, bad behavior is so rewarded in this town and it’s so unfortunate. It boggles my mind. I think being a role model is a responsibility. So to be able to have social media to change that is great.”

Alexander, who in addition to being a cofounder of the site is also a working actress currently on Rizzoli & Isles, said social media was much more difficult for her to embrace.

“In the beginning, when I was asked to do it, I really didn’t know what to do,” she said. “It felt way too personal. My day is usually, when I’m shooting, I’m up at 5 in the morning, we’re on set 12 to 15 hours a day. I have two little children; I have a husband. The last thing I’m thinking about is, ‘Hey, here’s me, here’s my favorite toothpaste!’ That’s not where I go. Some people do. It’s not where I go, nor is it what interests me in other people. What I like about social media is exchanging ideas. Poetry, art. I love quotes of the day. When I started to use it for what I felt comfortable with, then I started to see the rewards in it.”

It’s that kind of candid discussion that TakeHollywood hopes to share and foster in the acting community.

“More than anything, it’s just inspiration,” said Naboa. “One of the things Edoardo mentions in the founders video we did [is] everyone is on the same journey. Whether you’re Patricia Arquette or Seth Green, you’re on the journey. So just be in it.”