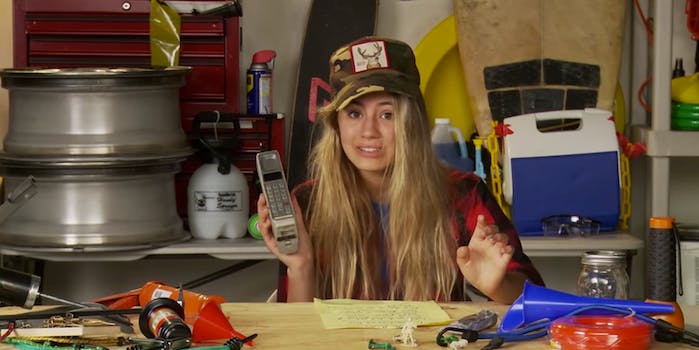 It's the third deal for an AwesomenessTV star in just as many months.

Yet another teen star from AwesomenessTV is rocketing off of YouTube.

Lia Marie Johnson will be getting her own TV movie on Nickelodeon based on Terry the Tomboy, the character she portrays on AwesomenessTV’s YouTube channel and a weekly Nickelodeon sketch show.

Older fans may recognize her instead from Benny and Rafi Fine’s Kids React and Teens React series, where she often offered insightful comments and criticism on the topic at hand. Off the show, Johnson, at 17, has more than 900,000 subscribers on her own YouTube channel.

According to Variety, Terry the Tomboy will be dealing with her first crush in the TV movie, set to air on Nickelodeon June 21.

“Terry the Tomboy embraces one of Nickelodeon’s many hilarious characters that has experienced enormous popularity on our air and online,” Russell Hicks, Nickelodeon’s prexy of context development and production, said. “Our audience will soon see a new side to Terry’s offbeat world where she must decide between being true to herself—or changing to obtain acceptance from others.”

This is the third deal for an AwesomenessTV star in just as many months. Vine stars Nash Grier and Cameron Dallas got their own movie in April while Australian pranksters the Janoskians announced they were making a movie with Lionsgate just a couple weeks ago.