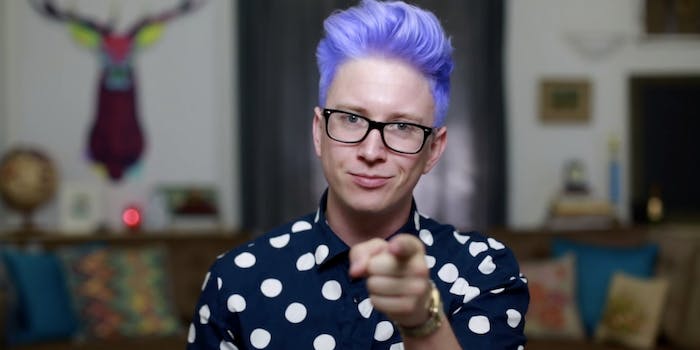 Here’s how you can apply for a $30,000 scholarship from Tyler Oakley and Taco Bell

Tyler Oakley and his teen fanbase share a love of Taco Bell, so it’s only natural that the restaurant chain would team with the YouTube star to find a teen scholar for 2015.

The Taco Bell Foundation for Teens is launching a Graduate for Mas campaign in partnership with Get Schooled that aims to find a teen ambassador who will appear in a Taco Bell ad, on materials inside stores, and be awarded a $30,000 scholarship to further his or her education.

“Being involved in the search to find the next Teen Scholar is a big deal for me. I’m excited to be part of an organization that is providing life-changing opportunities and the right resources to teens,” said YouTube personality Tyler Oakley in a press release. “Most of my viewers are teens, and they are passionate about so many different causes. The next Teen Scholar will help spread the inspiration to their peers to change the world!”

Taco Bell is a frequent supporter of Oakley and other teen-focused YouTubers. He’s been part of the company’s Feed the Beat campaign covering music events on red carpets, as well as an ambassador for a campaign to lower high school dropout rates since April. While the Taco Bell Foundation for Teens might sound like a new ploy to increase marketing to their teen base, it’s actually been around since 1992 and has awarded over $45 million in grants and scholarships. Teens and Taco Bell have gone hand-in-hand for more than 20 years; it’s just the method of getting those teens’ attention that has changed with the YouTube generation.

Submissions for the Graduate for Mas program will stay open until Sept. 17, and the winner will be selected based on video submissions in which the entrants explain who they are and why they’d be an inspiration to other teens.