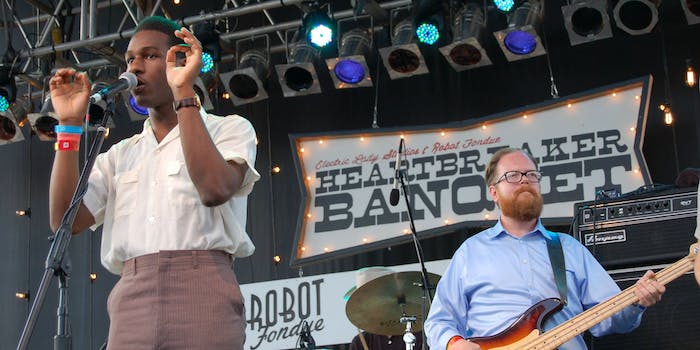 Mining big data to find the next big thing at SXSW

Big data companies are tracking your listening habits. But do they have good taste in music?

You didn’t need an algorithm to know Leon Bridges was going to be the breakout star of South by Southwest 2015.

Tall, dark, and handsome, the 25-year-old soul singer came bearing a rags-to-riches narrative as tightly tailored as his dapper wardrobe: Just four months ago, he was washing dishes in Dallas when he was discovered by chance, quickly shuffled into the studio, and signed to Columbia Records. His stirring throwback ballad “Coming Home” lit up YouTube, and reviews of his initial string of live shows further cemented his standing as this year’s must-see act.

There’s always one such artist to emerge from the hysteria of SXSW with the sort of buzz that directly leads to sold-out tours. But after that, it’s basically a crapshoot.

Nearly 2,000 bands converge in Austin, Texas, for the annual music conference, loading amplifiers into every conceivable corner of the city: venues, garages, backyards, parking lots, and riverboats. Catching the perennial next big thing isn’t just a matter finding the proverbial needle in the haystack; it’s a five-day pinball of critics’ picks and cabs, of signals and noise.

Given the behind-the-scenes rise of big data in the music industry, I reached out to two leaders in the field for some direction, asking who their algorithms were predicting for breakthrough success at SXSW.

So does big data actually have good taste in music?

Next Big Sound boasts a patented predictive algorithm that tracks everything from Spotify plays and YouTube views to interactions on Twitter and Wikipedia page views to evaluate artists’ growth rate and assess the likelihood of hitting the Billboard 200 chart in the near future. The service has been used by corporations like Pepsi to discover emerging talent, but its applications are practically limitless.

By contrast, Musx, an Austin-based music discovery app, is more user-facing, allowing people  to seamlessly share and tag songs. Its algorithm, according to cofounder John Reardon, is a combination of “listens, comments, and ‘favorites’ that are weighted differently and factor in time,” with an emphasis on shares and reshares.

So does big data actually have good taste in music? I spent last week trying to see as many of the recommendations as possible. The results were mixed—to say the least.

An Instagram post by Taylor Swift put BØRNS’ “Electric Love” on everyone’s radar, leading to a Hulu commercial and 600,000 views on YouTube. Singer Garrett Borns’ glam-rock grandeur might fill arenas—at least when opening for Swift—but it’s bogged down by generic sentiments (“paradise in your eyes”) and best in ringtone-length bytes. He gets a pass for his straight cover of “Benny and the Jets.” 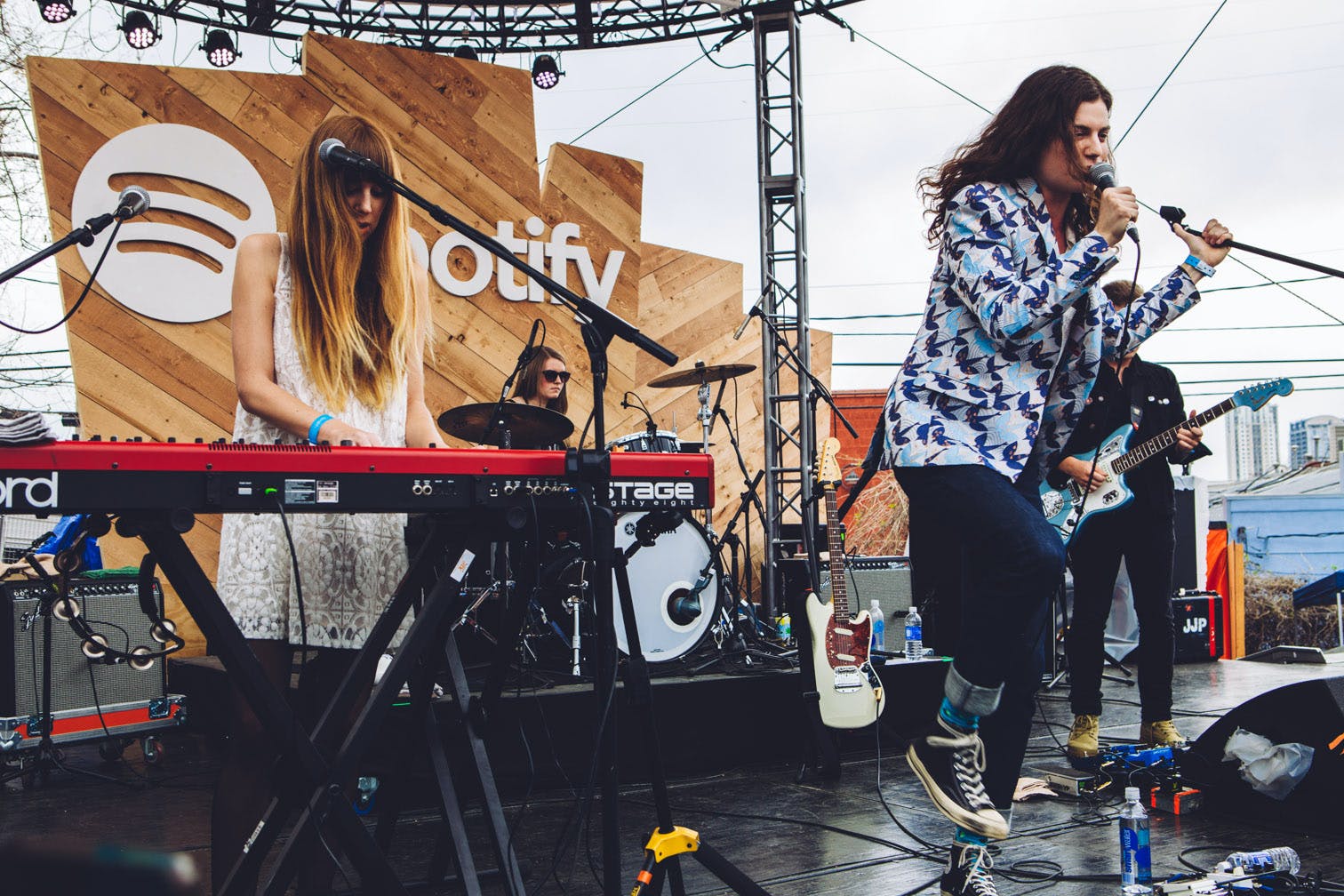 As formulaic as the name implies. A self-described “paranoid electronic music project from the Internet,” led by producer Alan Wilkis with a rotating cast of guest contributors, Big Data’s flair for the obvious and dramatic is geotargeted for the YouTube masses (the video for “Dangerous” has 5.7 million views), but you get the feeling that Wilkis and company are performing more for the smartphones than the crowd.

Finally, something the machines and I can agree on. Broncho’s power-pop nugget “Class Historian” tilted scales after being picked up for Tinder Plus’s ad campaign and Imagine Dragons’ Tonight Show mixtape—to the tune of 2.5 million streams on Spotify. The Norman, Okla.-based band’s late-night set Wednesday proved the perfect pick-me-up, packing in one jittery power-pop nugget after another, with bottle-rocket adrenaline and basement party fervor. Tour additions Mandii Larsen and Penny Hill of Tulsa, Okla.’s Low Litas filled out the set with harmony and distortion in equal measure.

One of the more blogged-about artists of the year, Zella Day has everything going for her: urban nomad appeal, 1.3 million spins on SoundCloud for her “East of Eden,” an upcoming EP for Hollywood Records, and GIFs aplenty for Tumblr. Oh, and she’s still in her teens. She’s been likened to a softer Lana Del Rey, but live, Day reminded me more of early Lykke Li, with bruised pop songs, cut like diamonds. 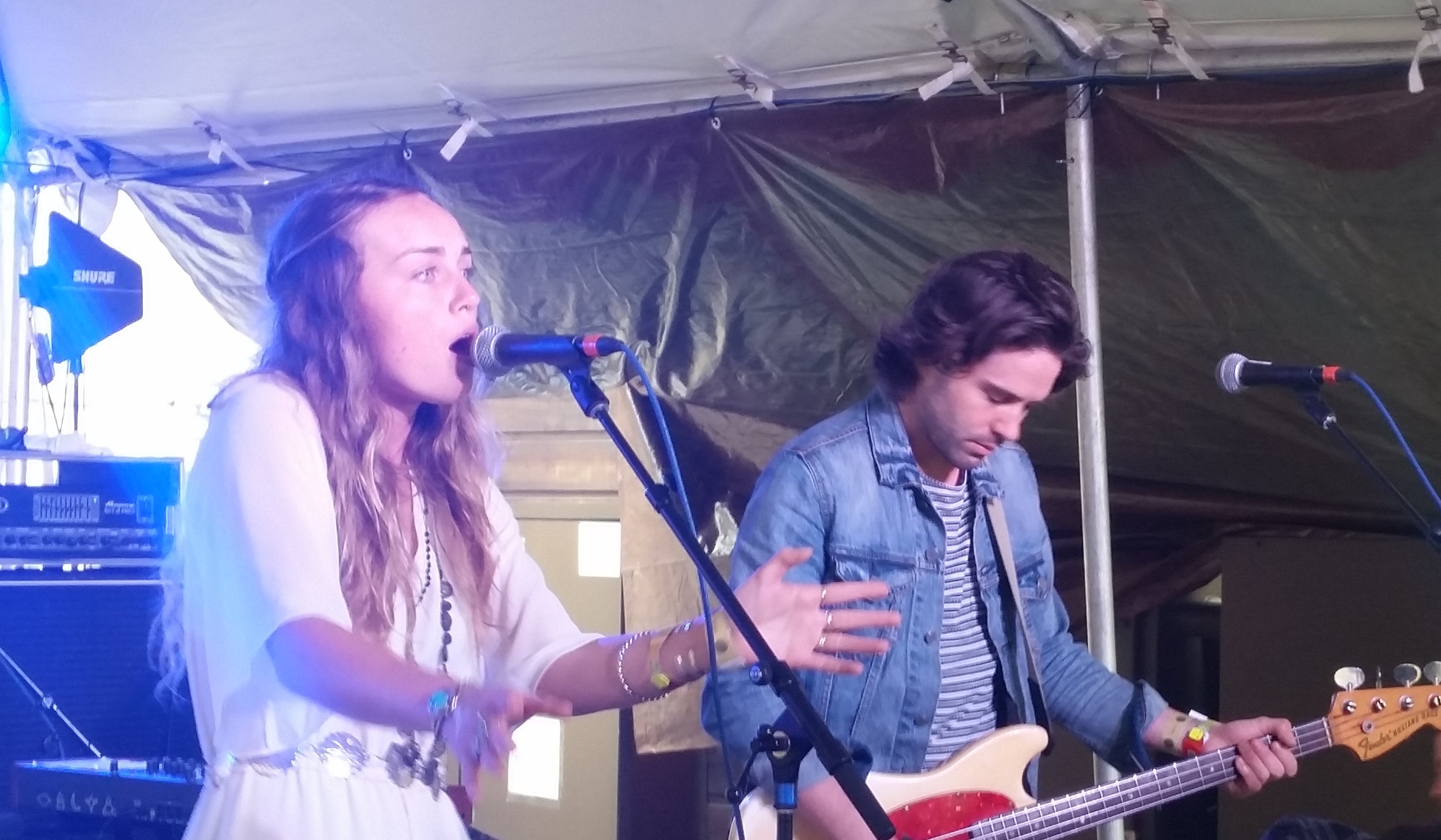 By any reasonable measure, Natalie Prass’s Tuesday night set should’ve been a disaster—jet-lagged, a brand-new guitarist, no Wurlitzer, “getting dripped on by something”—but she’s clearly the type of performer who can roll with the punches. While I’m not as smitten with her self-titled debut as most, Prass has the spunk and doe-eyed sincerity to match her antiquated pop ballads. She’s basically a Disney character in a Kiss shirt.

The hype followed Bridges everywhere he went last week. At Willie Nelson’s Heartbreaker Banquet—set on the country icon’s private ghost town on the outskirts of Austin, constructed for the filming of Red Headed Stranger—Bridges delivered a suave, tender set of retro soul that quickly won over both hippies and hipsters.

He’s got one foot in the church, the other in the bedroom, and his heart in New Orleans.

With a Mad Men-level of detail to historical footnotes, Bridges harkens back to the time when artists like Sam Cooke were moving from gospel to the mainstream, taking inspiration from the love lives of his parents and grandparents. He’s got one foot in the church (“Take Me to Your River”), the other in the bedroom (“Flower”), and his heart in New Orleans. He’s still finding himself onstage, with revealing moments of deer-in-the-headlights vulnerability, but that only made him more endearing. You can tell he’s barely scratched the surface of his potential. 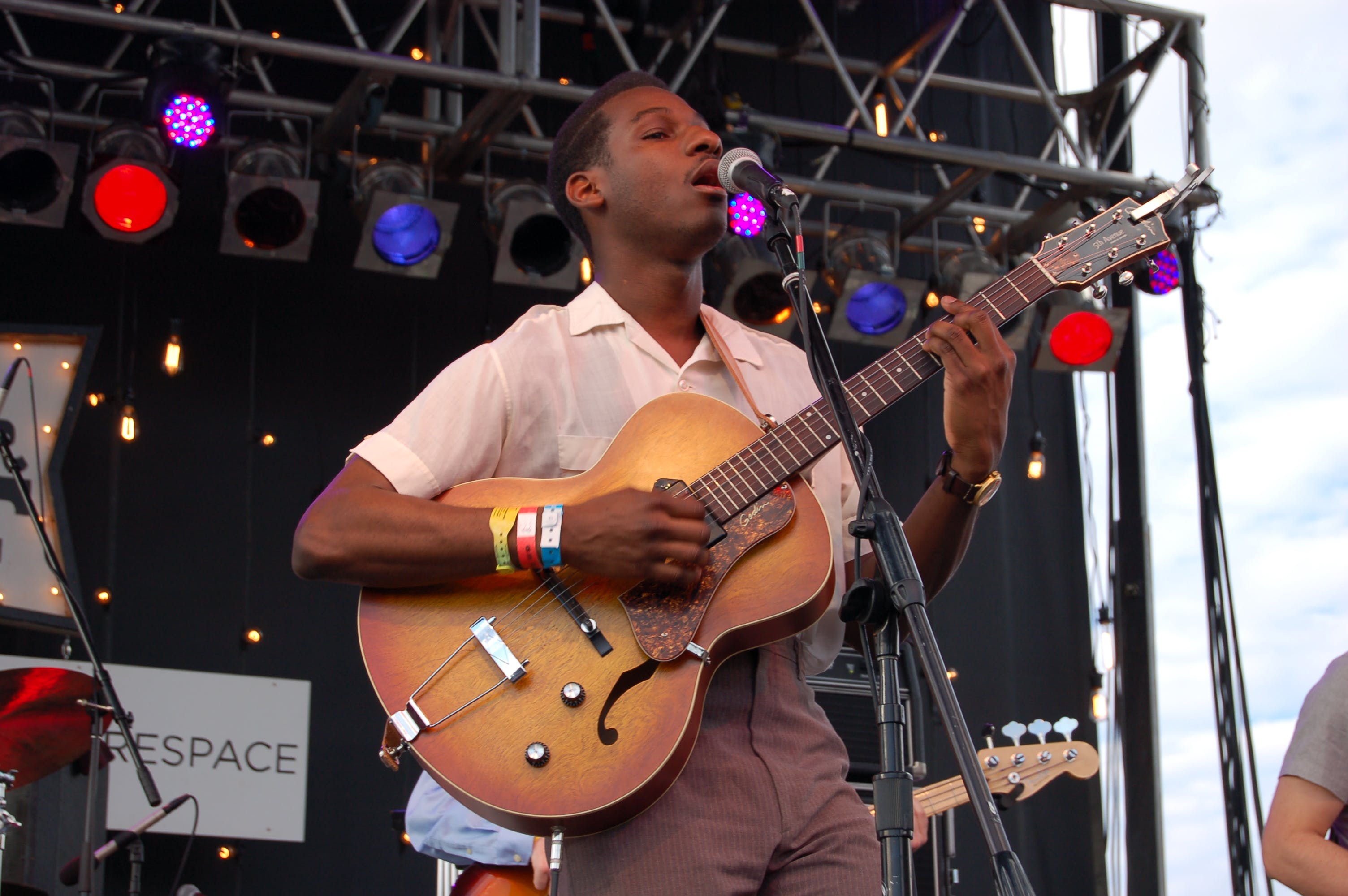 The latest in a long line of London songwriters imported to entertain bored housewives. The 23-year-old has a remarkable voice but seemingly nothing to sing about. He performed last week on Jimmy Kimmel Live, and his single “Hold Back the River” has registered 12 million views on YouTube, but Friday night at St. David’s Historic Sanctuary, I fell asleep in my pew.

Due to logistical issues, there were a number of recommended bands from both parties I wasn’t able to see, most notably Elliphant, Meg Mac, and Fetty Wap, but I caught enough to draw a few anecdotal conclusions.

The idea behind these predictive data companies is that they help you get ahead of the curve, to find the glimmer of gold in the rubble. Judging by Next Big Sounds’ charts and SXSW recommendations, that’s not really the case, though. Most of the company’s suggested bands were either already established—the Dodos, for example, notched Pitchfork’s Best New Music tag in 2008—or signed to a major label, making them only a few late-night TV appearances away from mainstream success. In other words, Next Big Sound was not only playing with a stacked deck but betting after the cards had been dealt.

The idea behind these predictive data companies is that they help you get ahead of the curve, to find the glimmer of gold in the rubble.

Even still, both Musx and Next Big Sound missed the mark a couple of times. Their models—while differing substantially on inputs—both rely heavily on virality to inform recommendations, latching onto breakout tracks and notable @mentions. That’s inevitably going to lead to a few one-hit casualties, since YouTube success doesn’t necessarily translate to the stage or the mainstream. Remember Carly Rae Jepsen, Kreayshawn, or Karmin? Exactly.

In short, big data won’t champion the next Black Keys, but it will help select the next song for a (insert arbitrary car manufacturer) commercial.

To be fair, I’m not Next Big Sound’s target audience. The bands that knocked me over last week—Lace Curtains’ bedhead soul, the industrial-strength post-punk of Viet Cong, and La Luz’s heatstroke surf-punk—won’t hit the Billboard charts anytime soon. 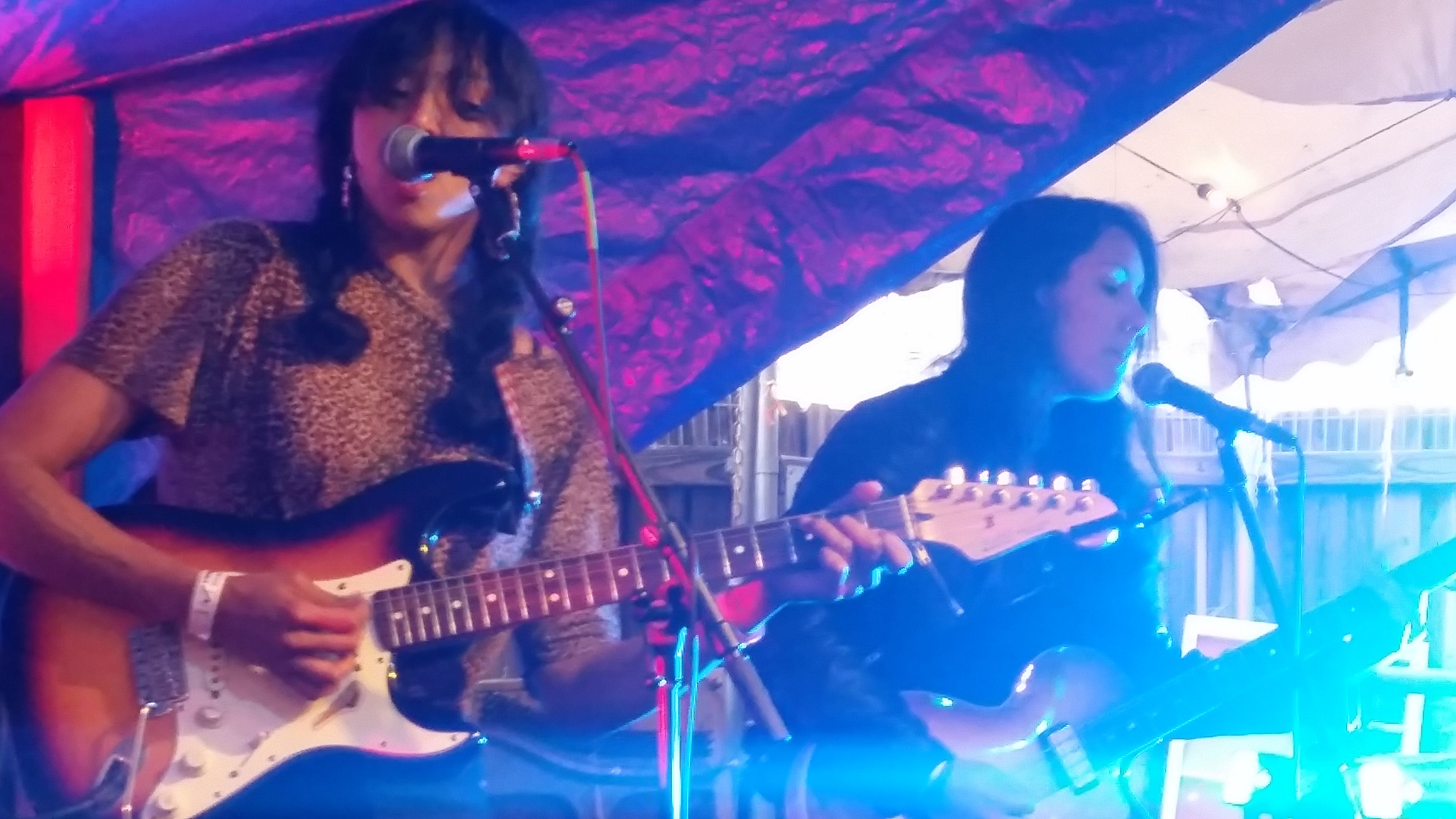 Chicago guitarist Ryley Walker, for example, recast the British folk revival of the late 1960s—Pentangle, Nick Drake, Tim Buckley—like a scene from True Detective, a pastoral darkness lurking on the edge of town. His backing band played more like a jazz trio, nimble and responsive, lending considerable weight to Walker’s circuitous songwriting and near-scat vocal improvisations. His stunning cover of Van Morrison’s “Fair Play” proved his range Tuesday at the Mohawk, but it was his visceral closer “Sweet Satisfaction” that had me inadvertently holding my breath.

Likewise, Canada’s Lindi Ortega, the belle of the Heartbreaker Banquet, came off like Dolly Parton in mourning, dressed for a Southern funeral and with songs about whiskey and weed, cigarettes and truck stops. 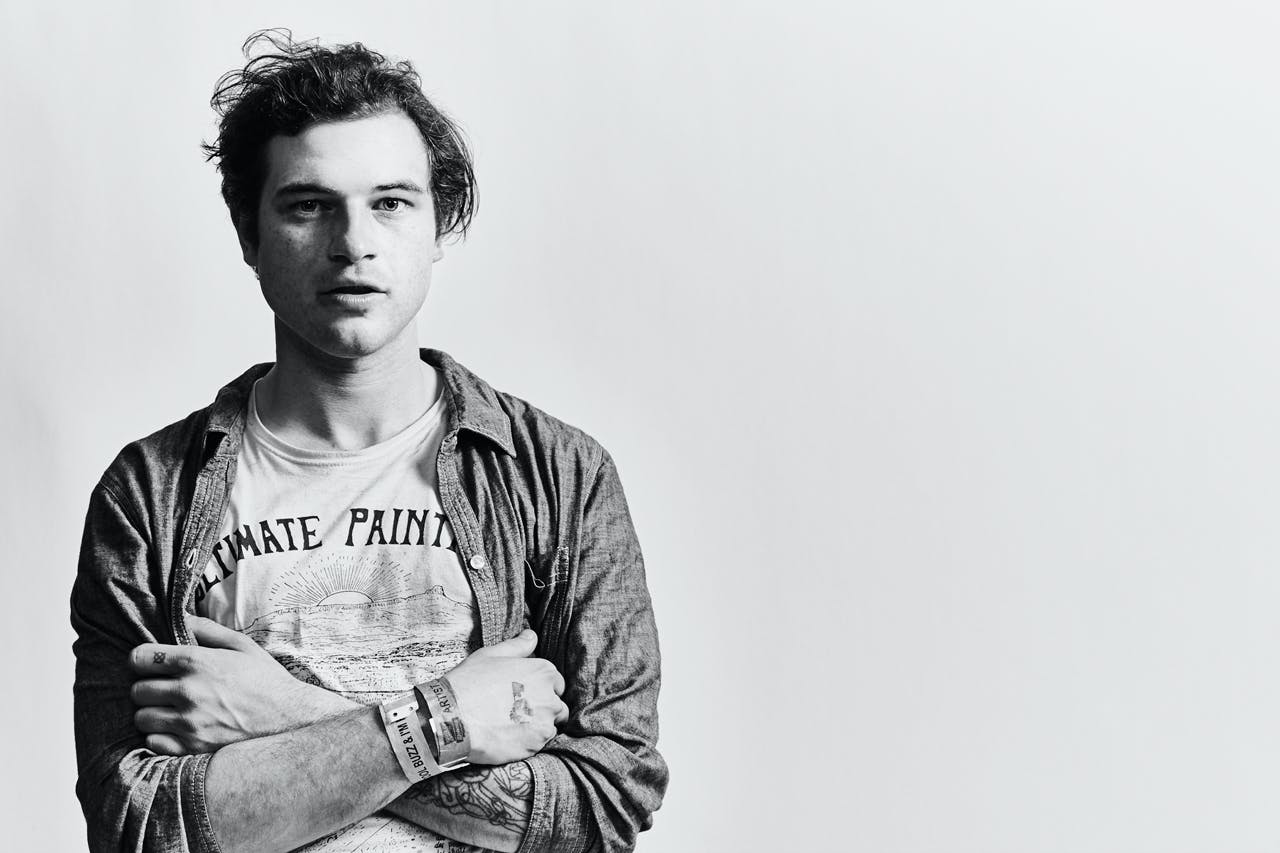 There’s unquestionable value, however, to the data that Next Big Sound mines. Just look at the week-of stats offered for Zella Day. By examining her social mentions across a number of platforms, you can begin to quantify the value of SXSW, outside of traditional press clippings and showcase attendance. 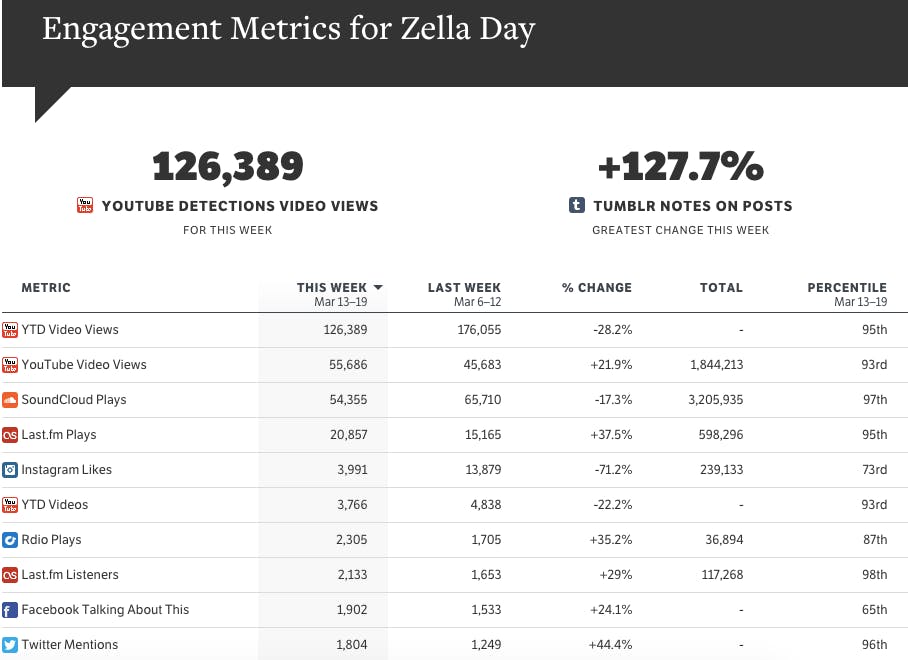 Those data points are tells, signaling “indications of intent or likely future purchase activity,” according to Next Big Sound CEO and cofounder Alex White.

“The thesis of this company is that attention precedes monetization,” White told the Kernel last week. “Before you go to a concert, before you buy an album, you do a Google search or look up an artist on YouTube or Spotify.”

Big data is going to continue to quietly shape the music industry from behind the digital curtain, informing everything from album singles to tour stops and artist signings. It’s certainly no coincidence that three of the bands listed (Big Data, Joywave, and Zella Day) all played Pandora’s Discovery Den on the same evening.

Big data is going to continue to quietly shape the music industry from behind the digital curtain.

But it’s going to take considerable time before these services will be able to cater to our personal tastes. Next Big Sounds’ “predictive success algorithm” is reminiscent of when Google patented PageRank in the late ’90s, as the number of websites grew exponentially. In weighing backlinks to determine a site’s relative importance, Google revolutionized online search by ranking query results by perceived importance. There’s similarly an endless amount of new music out there, and there are a number of critical data points that can help signal virality and artists to watch. But as consumers, we’re moving targets with changing expectations, and as with Google Search, there’s still not a great way to find something when we don’t already know exactly what it is.

Oddly enough, Next Big Sound and Musx overlapped on only one suggestion: ASTR, whose cover of Drake’s “Hold On We’re Going Home” went viral last year. I’d planned to wrap up my week with the electro-R&B duo’s 1:20am set Saturday, but at that point I’d long grown tired of the experiment.

The hype machine never sleeps, but I needed to.