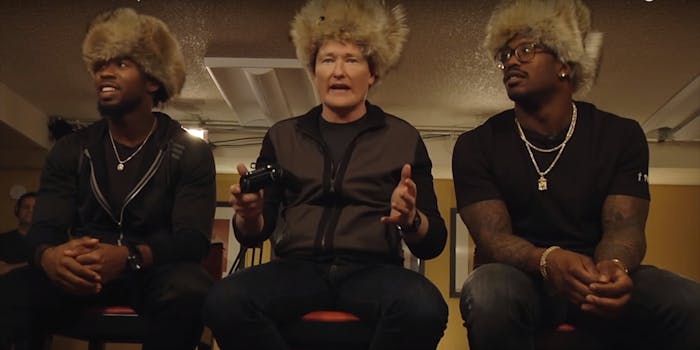 Everything is better with one of Von Miller’s fur hats.

The Super Bowl has many timeless traditions, but Conan O’Brien is marking the big game by linking football fans and gamers with as much game-induced rage as the Super Bowl deserves.

As he did before last year’s big game, O’Brien brought together Carolina Panthers cornerback Josh Norman and Denver Broncos linebacker Von Miller to play Doom. O’Brien had a bone to pick with Miller after he and the Broncos defense shut Tom Brady down in the AFC Championship game, but otherwise, it was a much more relaxed environment than either player will probably experience come Sunday.

With a Marshawn Lynch cameo, some fur hats, and lots of stabbing monsters and holograms—Miller knew what it was because he saw Tupac at Coachella—the game quickly turns into a friendly bloodbath. But will the winner of Clueless Gamer be the winner of the Super Bowl?