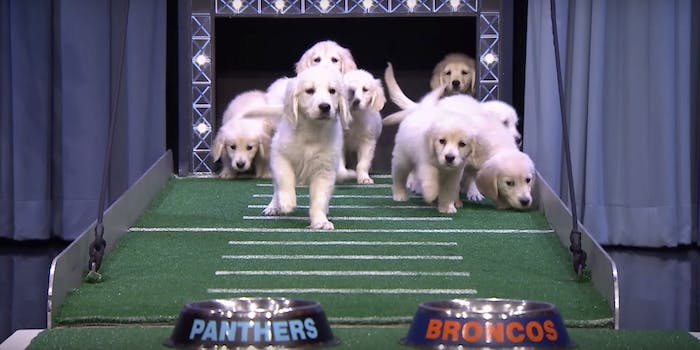 They don't always get it right, but they're cute doing it.

With Super Bowl 50 just days away, Jimmy Fallon is turning to his most trusted advisors to predict the winner.

It’s a time-honored tradition at Fallon’s Tonight Show to let puppies call the winner of major sporting events. Not only do they amuse us for sport, but they get to munch on all the kibble they want—and Fallon has a hell of a lineup.

If the puppies have anything to say about it, it’ll won’t just be a clear victory—it’ll be a landslide.

But how accurate are they? If you take a look at Fallon’s YouTube channel, you’ll see nearly 100-percent accuracy. The puppies called American Pharoah for the Kentucky Derby, the Broncos for the 2013 season opener, and the 2013 World Series.

But they don’t always get it right. They made the wrong call for the 2015 College Football National Champion Game, Super Bowl XLIX, Super Bowl XLVIII, and the 2012 election. And most of those videos have since been made private on YouTube.

There are exceptions to this. The puppies were completely off about Michigan State, and that video is still on YouTube, but they got Argo right, and that video’s gone.

But make no mistake. Right or wrong, this year’s puppies called the Broncos to win it all.