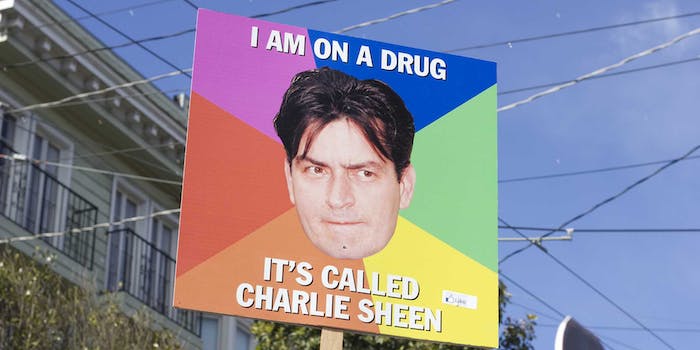 This thing has better plot twists than Two and a Half Men.

Some two years ago, Charlie Sheen took us on a wild ride. In the weeks leading up to Sheen being fired from Two and a Half Men, the seemingly unhinged actor went on many a no-holds-barred rant, and we were introduced to his world of prostitutes, tiger blood, anti-semitism, and “winning.”

He was replaced on Men by none other than Ashton Kutcher (who received a mind-boggling amount of money for taking on the role). At the time, Sheen and Kutcher traded niceities about the switch-up, and the world kept spinning: Sheen kept up his antics, and the show your parents watch if Everybody Loves Raymond isn’t on that night continued.

While Kutcher has only recently entered the fray, Sheen’s been stirring the pot since the beginning of January (and likely dropped the odd Kutcher slam before, but this is when things really picked up steam).

Ashton finally responded to all this when he was on Jimmy Kimmel on Wednesday. Fast forward to the 3:46 mark where Kutcher says:

Can I just enter a public plea with Charlie? Dude, shut the fuck up already! It’s like three years later and you’re still blowing me up on Twitter?

And then the Sheen retaliation rained swiftly down upon us.

Ashton message received. so sorry u sounded like me! well done! my bad I was pissed at other crap & took it out on you. hope u r good xox c

but news flash Dood, you ever tell me to shut the F*** up, EVER again, and I’ll put you on a hospital food diet for a year. c #YaFeelMe Jr?

Message received, though not well, apparently. Sheen tweeted this the next day.

This is a first… pic.twitter.com/sMlqRZS1tP

The next day, Sheen tweeted this:

Was he trolling Kutcher? Mocking him? Or did he, too, just enjoy that adorable photo? All that’s clear is that since then, he’s been subtweeting Kutcher like it’s his job. Which, truth be told, might actually be his next gig if Anger Management’s ratings keep falling.

But maybe, just maybe, the subtweeting war could be ended if they just remembered their mutual love of dog as backpacks.