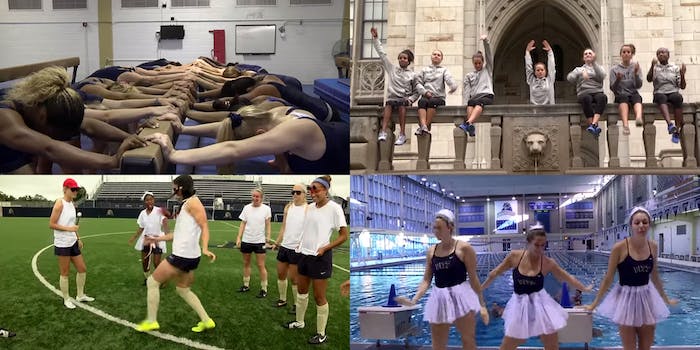 Student athletes really love to ‘Shake It Off’

Everyone has a different reason for doing it, but we all want to shake it off.

When Taylor Swift said, “players gonna play,” she probably wasn’t talking about basketball. Regardless, Swift’s hit single “Shake It Off” has become the unofficial theme song of several student sports teams this year.

Scores of “Shake It Off” parody videos have surfaced on YouTube showing sports stars, mascots and athletic departments just shaking it all off. There are lacrosse players jumping off walls, synchronized swimmers in ballet skirts, and kinesiology professors getting their groove on in hallways. Even the U.S. Air Force Parachute Team got in on the action this week, lip-syncing to Swift’s song during choreographed mid-air stunts to show their support for Saturday’s game between the U.S. Air Force Academy and Army Spirit.

With the exception of an occasional athlete saying he or she is bummed about losing a game, most of the teams leave their reasons for shaking it off mysterious. Here’s a collection of some of the videos.

Like it or not, “Shake It Off” is quickly becoming this year’s go-to song for student athletes, colleges, and anyone else who wants to brush off their haters and players. The song is already getting tired, but look on the bright side: At least it’s not the “Harlem Shake.”

Surprisingly, “Harlem Shake It Off” is not a thing—yet. Internet, make it happen.