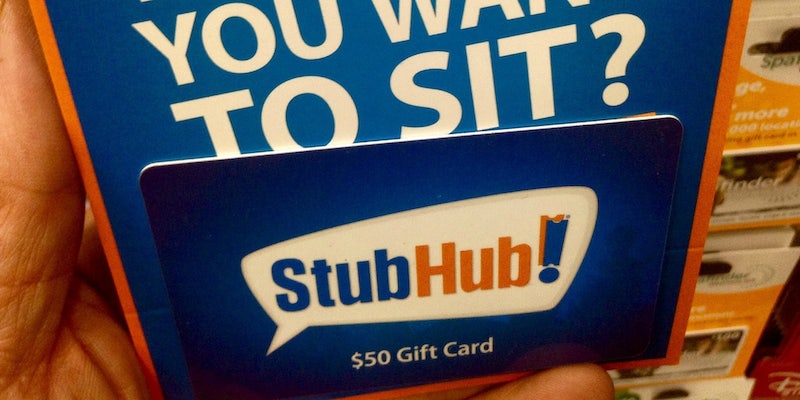 StubHub has promised to make it right.

Jesse Sandler has a great knack for knowing when to buy tickets off StubHub. But StubHub wasn’t quite as good at delivering on the tickets for which he paid.

As Sandler told The Lead this week, he originally bought four tickets to the final Lakers home game of the 2015-16 season for $906. Three weeks later, superstar player Kobe Bryant announced his retirement and seat prices appreciated nearly 1,000 percent. StubHub responded by telling Sandler that his tickets had been voided because he originally had paid too small a price.

The story has bounced around the Internet for the past two days, but on Wednesday, the eBay-owned, secondary-market ticket seller responded with an apology and a promise.

We shot an air ball on this one. Rest assured we'll take care of Jesse & get him to the game. @theleadsports pic.twitter.com/ZGOacVJT38

@theleadsports We hold our sellers to a very high standard and we don’t condone market manipulation. @themantz @NobodyEpic

The problem for Sandler began last November when he bought four tickets to the April 13 Lakers-Jazz game. He had an inkling that it might be Bryant’s final game and he paid $906.77 total for the tickets, taxes, and fees.

Bryant announced his retirement November 29, and not surprisingly, the ticket price for the season finale (and Bryant’s career finale) shot up. In an email to The Lead, Sandler wrote:

“The tickets I paid $900 for were now retailing for about $6,000. … That’s when everything fell apart and StubHub screwed me over in a manner I still find incomprehensible. A little over two weeks after Kobe made his announcement and over a month since I had bought and became the rightful owner of my tickets, I received this typo-filled email from the world’s worst ticketing company:” 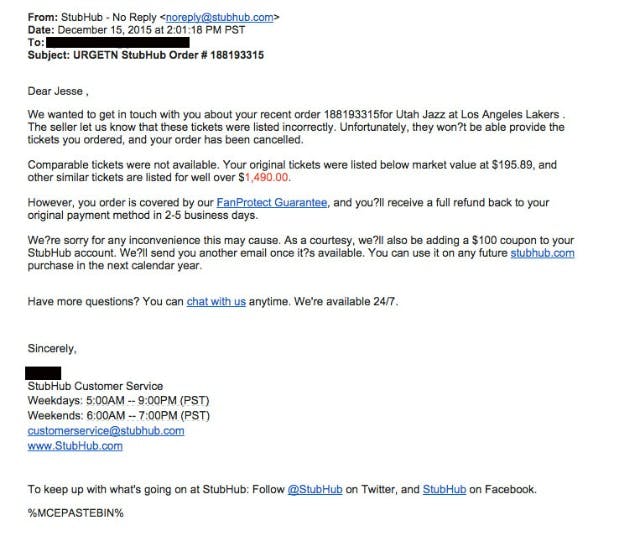 Flabbergasted, Sandler wrote an email back:

“When I bought the tickets, they were at the correct market value price. I do not know how you and the seller can back out of the deal, stating that, ‘Tickets were listed incorrectly.’ I cannot believe that this would happen and that you would allow this to happen.”

Sandler continued to argue with StubHub representatives over the phone and the company offered him as much as $250 in compensation along with his refunded money. Eventually, a supervisor explained to him that StubHub charges the seller 20 percent of the original sale price if the seller backs away from a deal that already been made and that the seller could be banned temporarily from selling on the site.

“In other words, StubHub’s official policy incentivizes sellers to renege when prices go up more than 20 percent,” Sandler wrote in his email. “In my case, where the tickets appreciated almost 1,000 percent after I bought them, it’s in the seller’s best interest to cop out … It also means that no tickets you ever buy on StubHub—ever—are actually your tickets. The seller can just change his mind at any time and take them back. This makes no sense and reveals their entire operation as a complete sham.”

A StubHub representative told SFGate.com that the company’s user agreement states that sellers are not allowed to cancel orders at one price and then repost the same tickets at a higher price.

“Our User Agreement is 100 percent accurate and should have been implemented in the case of Jesse Sandler,” the StubHub spokesperson said. “The handling of this situation was an error that should have not occurred. We hold our sellers to a high standard and we absolutely do not condone market manipulation like this … We take our customer service very seriously. This was a mistake that we will learn from and we will do everything in our power to make sure this doesn’t happen to one of our customers again.”

Sandler, though, doesn’t need any help from StubHub. According to a follow-up post from The Lead, a different ticketing website called Tickets For Less gifted provided him “with four (slightly better) seats to witness Kobe’s send-off. Jesse got his happy ending, but for this story to truly conclude on a high note, StubHub needs to fix its product …”

Or to put it another way.