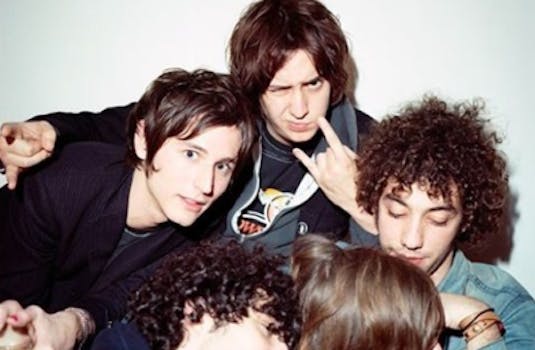 The Strokes were undone by Ryan Adams and drugs, new book alleges

Journalist Lizzy Goodman‘s new book Meet Me in the Bathroom: Rebirth and Rock and Roll in New York City, 2001–2011 serves as an oral history of a very specific time in the American music industry, and the snippet she released today to tease it is juicy as heck.

Vulture released an excerpt from the book about the Strokes: a band that in the early aughts was poised to be America’s Next Enormous Act but somehow fell short. Their career trajectory suffered because of the dawn of the internet and pirating, sure, but according to people who were around at the time, they apparently owe a great deal of their interpersonal tension to none other than Ryan Adams. And heroin (~allegedly~).

The full excerpt is definitely worth checking out, but choice highlights include everyone making Ryan Adams sound like That Guy at the party:

Ryan Adams (musician): One night I was hanging with the Strokes guys and Ryan [Gentles, the band’s manager]. We were really stoned because we were basically always smoking pot. It was very late. Fab would always play me a song that he had written, some beautiful, romantic song. So one night, jokingly, I’m almost certain, Fabby said, “Dude, what if John Mayer was playing that guitar right now?” And I said, “I can make that happen.” Now, I lived down the block from John Mayer, and he’d been talking to me about his new song for a while. So I texted him, because he was always up late back then. I said, “Come to this apartment. Bring an acoustic guitar. I really want to hear your new song.” I didn’t tell them that I’d done it. So everyone is sitting there and I was like, “Let’s all take bong hits.” I really wanted it to get crazy. We smoked some bong hits; I probably did some blow. The doorbell buzzer rings, and I open the door, and John Mayer walks in with his fucking acoustic guitar, and they were all slack-jawed. John sat down and played the fucking acoustic guitar —three or four songs that probably have gone on to be huge—while those guys just sat there staring at me like, Oh my God, you’re a witch.

Gideon Yago (journalist): Ryan Adams, he was one of those guys where I just remember being like, I just don’t know. I didn’t take to him very well. I mean, that to me was the beginning of the end.

Fabrizio Moretti (drummer, the Strokes): He would come over to our apartment a lot.

And, despite Adams’ protests, Albert Hammond Jr. flat-out states that Adams introduced him to heroin:

Albert Hammond Jr.: I remember Julian threatening to beat Ryan [Adams] up if he hung out with me, as a protective thing. He’d heard that Ryan would come and give me heroin, so he was just like, “If you come to my apartment again with heroin, I’m going to kick your ass.” I hadn’t really been doing it in baggie form until Ryan showed up. He was definitely a bad influence.

Ryan Adams: That’s so sad, because Albert and I were friends. If anything, I really felt like I had an eye on him in a way that they never did. I was around and we actually spent time together. He would show me his songs. It was like, “No one ever listens to my music, but do you want to hear it?” I would be like, “Fuck yeah!” I loved him so deeply. I would never ever have given him a bag of heroin. I remember being incredibly worried about him, even after I continued to do speedballs.

The excerpt reads like the juiciest gossip from a rock ‘n’ roll high school, where the main players are Jack White and Karen O. instead of Tyler from math class, and early reviews of the book suggest that the rest of it will be similar. Delicious.

Meet Me in the Bathroom comes out May 23.