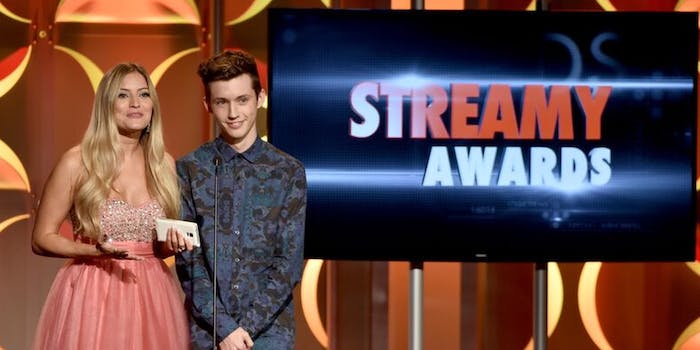 If you want proof that digital video is ever-changing, look no further than the nominations for this year’s Streamy Awards.

“Very happy to see the community respond to innovation,” Judy McGrath, president of Astronauts Wanted, told the Daily Dot. “Billy Parks embraced the spirit of Snapchat, and we launched a social story. Who doesn’t love a Snapper Hero?”

“If the strength of this year’s nominees is any indication, we are on track for the biggest Streamys ever,” wrote Streamy Awards creator Drew Baldwin in a press release. “This past year, video creators have inspired, educated, and entertained us like never before—and I can imagine no better way to celebrate our community’s achievements than with dick clark productions and VH1 for our first-ever television and digital broadcast.”

In the personality-oriented categories, past winners like Tyler Oakley, Mamrie Hart, and Grace Helbig all picked up nominations. Newly instituted categories like Snapchat Storyteller resulted in noms for both mainstream media mogul Ryan Seacrest and digital powerhouse Jérôme Jarre. The awards also expanded to include subject categories for Lifestyle and Documentary, as well as a Breakout Creator category, which saw nominations for YouTubers like Arden Rose, Jenn McAllister, and Matthew Santoro, none of whom have less than 1 million subscribers. Nominees in the breakout category have over 12 million subscribers between them.

The two fan-voted awards—Entertainer of the Year and Show of the Year—won’t be announced until Sept. 3, and fans can continue to vote for finalists through the live show on Sept. 17. The event will be broadcast live on VH1 at 10pm ET.

A full list of nominees is available at Streamys.org.

Photo courtesy of the Streamy Awards