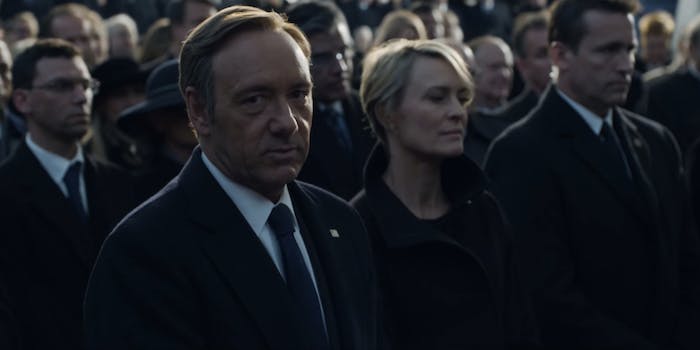 12 streaming political shows that are perfect for election season

We’re well past the point where truth is stranger than fiction, so why not take comfort in fiction?

We’re in the midst of the most insane American election cycle I’ve yet witnessed, with the world waiting impatiently for the moment when Donald Trump peels the skin off his face to reveal that he’s been Andy Kaufman all along. Between the constant mudslinging, the social media cacophony, and the bleak, unsettling feeling that the slope toward dystopia is receiving daily coats of grease, sometimes you just need a break. We’re well past the point where truth is stranger than fiction, so why not take comfort in fiction?

To that end, we’ve assembled a dozen outstanding political shows that you can stream right now, ranging from the jaw-dropping twists of House of Cards to the wholesome comfort food of Parks and Recreation. We’ve got a long road until Election Day, and you know it’s only going to get crazier, so we wouldn’t blame you if you just lock yourself indoors and spend the next nine months binge-watching.

Four Republican senators keep the living costs down by sharing a house in Washington, D.C., in this series from Pulitzer Prize-winning Doonesbury creator Gary Trudeau and inspired by several real-life legislators. John Goodman heads the cast as the blustery North Carolina Sen. Gil John Biggs, and his roomies include Clark Johnson, Matt Malloy, and Mark Consuelos. Keep an eye out for cameos from Bill Murray, Amy Sedaris, Wanda Sykes, Stephen Colbert, and more. Two seasons of Alpha House are available on Amazon Prime.

Battleground is probably the lowest-profile show on this entire list, but it was actually Hulu’s first foray into original scripted programming. Created by J.D. Walsh (Two and a Half Men), the 2012 mockumentary series follows a Wisconsin campaign staff working hard to get their underdog candidate elected to the U.S. Senate. It’s reminiscent of Parks & Recreation, albeit less overtly silly, and critics praised the show’s writing and acting in spite of a nearly nonexistent budget. Battleground’s single season is available to stream on Hulu.

Steve Buscemi stars as the ruthless and manipulative Enoch “Nucky” Thompson, a spectacularly corrupt politician who pulled the strings of both legal and illegal enterprises during the Prohibition era in Atlantic City, New Jersey. Created by Wolf of Wall Street screenwriter Terence Winter, Boardwalk Empire is as much crime drama as political drama, but then again, the line between the two has always been thin at best. In addition to Buscemi, Boardwalk features dynamite performances by Michael Pitt as Nucky’s would-be protégé Jimmy Darmody, Kelly Macdonald as a pious young woman who feels an inexplicable connection to Nucky, and Michael Shannon as a Prohibition agent determined to bring Nucky down. All five seasons are available on Amazon Prime.

Cheers alum Kelsey Grammer left any Frasier comparisons in the dust with his leading role as Chicago Mayor Tom Kane, who attempts to steer a prosperous course for the Windy City while disguising the fact that he’s suffering from a progressively debilitating neurological disorder. Created by Iranian-American screenwriter Farhad Safinia (Mel Gibson’s Apocalypto), Boss ran for two seasons on Starz before being canceled. Unfortunately, that left some storylines up in the air, never to be resolved, but it’s still a ride worth taking for Grammer’s performance alone. Both seasons are available on Netflix Instant.

Depending on how the next nine months go, America may follow up its first black president with its first female president, but the short-lived ABC drama Commander in Chief explored the possibility a decade ago. Geena Davis stars as Mackenzie Allen, a vice president of the United States who suddenly gets kicked up into the big chair after the sitting president dies from a brain aneurysm. She must face down not only all the usual challenges of the presidency, but also all the bullshit others bring to the table because of her gender—not to mention those who question how she took the Oval Office, legal line of succession or no. The show was created by TV and film vet Rod Lurie, but he left the show early on; it was cancelled even after ABC brought in Steven Bochco to save it. You can watch the full season on Hulu.

Netflix’s flagship drama stars Kevin Spacey as Congressman Francis Underwood, a Machiavellian schemer determined to lie, swindle, betray, and extort his way into the highest corridors of power, no matter who gets trampled along the way. Ever at his side is Frank’s wife, Claire (Robin Wright)—brilliant and ambitious in her own right, and capable of being just as ruthless and formidable as her husband… perhaps even more so. Together, they set their sights on the highest office in the land, leaving a trail of bodies behind them and skeletons crammed into every closet. Unfortunately, that seemingly indivisible partnership hit the rocks hard at the end of the last season, so the Underwoods’ will-they-or-won’t-they reconciliation will undoubtedly form a huge part of the upcoming fourth season. House of Cards returns on March 4, so stragglers better catch up, pronto! (You can also check out the original British House of Cards series, which inspired the American version, right here.)

Téa Leoni stars as Dr. Elizabeth Adams McCord, a former CIA analyst and political science professor who becomes secretary of state after the current secretary dies in a plane crash. While her keen mind and expertise in areas such as the Middle East are invaluable, she’s no expert at playing the political “games,” leading her to frequently butt heads with White House Chief of Staff Russell Jackson (Željko Ivanek). In addition to the challenges and pitfalls of her career, Madam Secretary also follows McCord’s family life, in particular her husband, Georgetown University theology professor Dr. Henry McCord (Tim Daly). The show was created by TV vet Barbara Hall, who has also worked on such series as Homeland, Judging Amy, and Joan of Arcadia. Both seasons of Madam Secretary are available streaming on Netflix Instant.

Shot in the same mockumentary style as fellow NBC hit The Office, Parks and Recreation is centered around the men and women of the fictional Pawnee, Indiana, parks department. The unflappably optimistic Leslie Knope (Amy Poehler) is queen bee of the department, trying to make her hometown something special in spite of insufficient budgets, snarls of bureaucratic red tape, and the frequent distractions or disinterest of her staff. The yin to Leslie’s bubbly yang is parks and rec director Ron Swanson (Nick Offerman), a droll small-government Libertarian whose love of smoked meats is surpassed only by his joy at watching his department operate as inefficiently as possible. The cast is across-the-board amazing, with Poehler and Offerman verbally sparring with the likes of Rashida Jones, Aziz Ansari, Aubrey Plaza, and Chris Pratt, to name a few. All seven seasons of Parks and Rec are available on both Hulu and Netflix Instant.

Sigourney Weaver headlines this critically acclaimed USA Network miniseries created by Greg Berlanti (Arrow, The Flash). Weaver plays Elaine Barrish, a U.S. secretary of state (another one!) whose past résumé includes stints as governor of Illinois and as First freaking Lady. That presidential pairing didn’t last, however: After her own bid for the White House stalled out, Elaine filed for divorce from her philandering, formally presidential hubby. She’s now serving as secretary of state under the man to whom she lost the Democratic nomination (Adrian Pasdar). Carla Gugino also co-stars as a reporter who frequently makes Elaine’s life difficult. At only six episodes long, Political Animals is perfect bite-sized binge-watch if you’re craving political intrigue with a sense of humor. You can watch the whole thing on Netflix Instant.

Before he was exploring time and space as the current incarnation of the Doctor on Doctor Who, Scottish actor Peter Capaldi was swearing up a storm as the vitriolic Malcolm Tucker in The Thick of It. Created by Armando Iannucci as a sort of modern spin on the classic British political satire Yes Minister, The Thick of It centers on the fictional Department of Social Affairs and Citizenship, an entity that exists primarily to oversee other rungs of the British governmental bureaucracy. Chris Langham plays Minister Hugh Abbot, well-meaning head of DoSAC who struggles to do his job and make it through a single day without being verbally eviscerated by Tucker, the government’s director of communications. Much of the dialogue was improvised, and Capaldi delivers the acrobatic profanity with skill that rivals Deadwood’s Ian McShane. (Also be sure to watch the Academy Award-nominated spinoff film, In the Loop.)

Almost a decade after unleashing The Thick of It on the world, creator Armando Iannucci once again returned to skewer the political landscape with HBO’s Veep. Seinfeld’s Julia Louis-Dreyfus stars as Selina Meyer, onetime Maryland senator turned vice president of the United States. The role of veep has often been described as a thankless one, and the gig certainly generates its share of stomach acid for Meyer, who spends most of her days neck deep in political quagmires and misunderstanding. The show has earned Louis-Dreyfus multiple Emmys for her performance, as well as an Outstanding Comedy Series Emmy for the show itself in 2015. Only the first season is available for free to Amazon Prime members at the moment, but that should still be enough to hook you before Veep returns for a fifth season on April 24.

Last but not least is arguably one of the best political dramas ever to grace the small screen. Perhaps Aaron Sorkin’s finest hour, The West Wing aired for seven seasons on ABC beginning in 1999. The show racked up 26 Emmys as it chronicled the presidency of Josiah Bartlet, one of the greatest fictional presidents ever conceived and a masterful, charismatic performance by Martin Sheen. While the show had its ups and downs over the years, especially in the last few seasons, the cast, including Rob Lowe, Allison Janney, Bradley Whitford, Richard Schiff, John Spencer, and Dule Hill, was consistently excellent. The West Wing is by turns smart, funny, challenging, heartbreaking, and inspirational… but if you watch it and then compare the show’s aspirational characters to the actual current political landscape, you may very well wind up eating a bullet. Proceed with caution. All seven seasons of The West Wing are available on Netflix Instant.