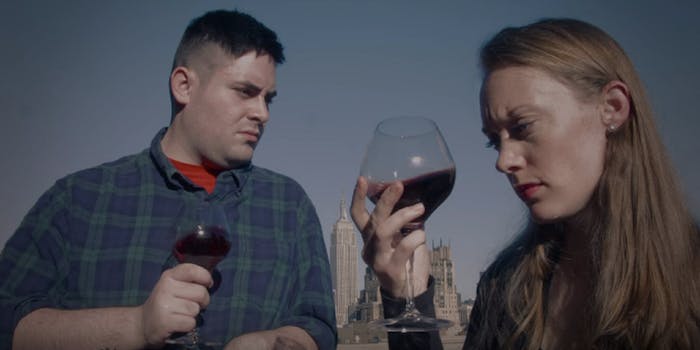 Gay comedians turn stereotypes on their head with ‘Straight Marriage’

What if straight people were portrayed as unrealistically as gay poeple?

Whether it’s a flamboyant best friend or an over-sexed single, gay characters on screen tend to be broadly drawn and fail to resemble reality. But what if straight people were painted with the same broad strokes we use for gay characters?

In Straight Marriage, Burns and Quinn star as a perpetually discontent couple who bicker over mundane details, can never remember each other’s star signs, and serve pretzels for dinner.

According to Quinn the series spawned from the real life intimacy of their friendship. Quinn told the Daily Dot, “It came from a kind of natural dynamic we have, which is … fond bickering.”

Burns interjected to correct her: “I would say it’s fun bickering. There’s an Everybody Loves Raymond quality.”

What the two can agree on is that while the characters are absurd, they’re rooted in a very real pattern of banter. “I feel like we’ve been doing these characters since we’ve known each other,” said Burns.

The two recalled that the idea for the series occurred to them one day when Burns was rushing Quinn out of the apartment where she had been dogsitting and the two began riffing.

Spatting at each other like an old married couple, they riffed so hard that they didn’t stop until they parted ways to get on separate trains. But at some point along the way they came up for air and agreed they would film a webseries about straight marriage.

With the help of Kosan, the duo fleshed out a series of absurd spats and moments, and they’ve already got ideas for season 2 in the works.

“I want to do an episode where I’m ordering for Kelley in a restaurant,” said Burns.

Although the series is light and comical, both Burns and Quinn have serious thoughts on representation in film and television.

“Sometimes I see weird Netflix movies where I’m like ‘oh, I love this,’ but I never see shows where I feel like the gay characters are relatable,” Burns said.

“A show I think does really well with queer representation is Orphan Black,” Quinn said. “I think in general a sitcom-y show is going to paint with broader strokes, so a lot of the shows I love don’t do great with gay stuff.”

“I’d like to see [more characters] where gay isn’t the unusual thing but just a character detail,” Burns added.

Said Quinn: “I’m a little weary of fraught coming-out stories. Give me more gay rom-coms! Give me more character arcs where someone struggling to accept their otherness is not the only thing happening in [his or her] life! Queer representation in the media lately seems either to skew very dire or very caricature-y. We’re making progress, but I’d like to see that change.”

In that spirit, give us more wine and more of this hilarious series, please!