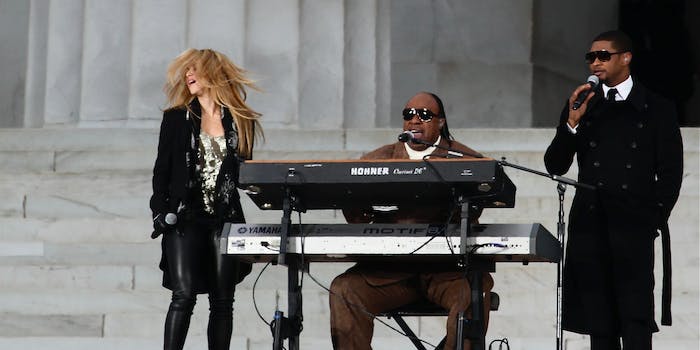 Stevie Wonder went down on both knees during a performance of the national anthem at the 2017 Formula 1 United States Grand Prix Sunday night, the second time he’s taken a knee in a month.

He headlined the final night of the Grand Prix (which took place after Sunday’s race) in Austin, Texas, and played a full show for the crowd. Toward the end of the nearly two-hour concert, Wonder went on both knees and began to play the national anthem on the harmonica. According to Austin 360, Wonder talked to the crowd earlier in the concert and told them that while he doesn’t like to get political he does want unity.

“It is time for the leader of this nation, the leaders in the varied political positions that they hold, the people, we as artists—all of us come together as a united people of these United States of America,” he said.

Stevie Wonder kneeling as he plays the National Anthem on harmonica. pic.twitter.com/1AAqHfGJq5

Closing out @F1 @COTA, Stevie Wonder on a harmonica and kneeling during an improvised version of the national anthem. 🇺🇸 pic.twitter.com/j622mNeJBP

Toward the end of the performance, he directed the audience to sing the end of the national anthem while he indicated his solidarity with those who are protesting racial inequality and police brutality during the song, which he also did last month, after President Donald Trump’s condemnation of the NFL protest drew more to the cause.

“In the home of the United States, or the united people of America—not some but all,” he said. “Feel me, feel me, Mr. President.”