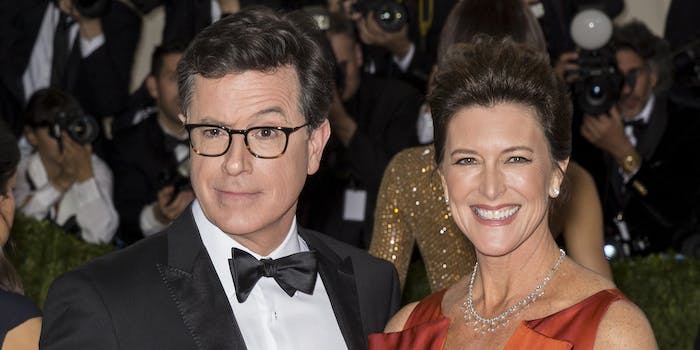 Every night before taping The Late Show, Stephen Colbert does a little Q&A with his studio audience, and a recent question about love yielded a very sweet answer.

When asked how he knew his wife of more than 20 years, Evelyn McGee-Colbert, was “the one,” the late-night host launched into a story about the night they met.

It seems that Colbert was on a visit home to South Carolina to clear his head and decide if another girl he was dating was “the one.” After a brief bit of advice from his mom made it clear that the two should part ways, he went to a play to cheer himself up. Then, out of nowhere, in walked Evelyn. His future wife.

We don’t want to give too much away, but he says he remembers that seeing her was the first time he thought, “Who’s that woman?” instead of, “Who’s that girl?”

The host also added a correction to his own reference to The Odyssey in the clip. “*Colbert’s correction: the sneeze is not from the Nausicaa episode, it’s Penelope during Odysseus’ return to Ithaca!”