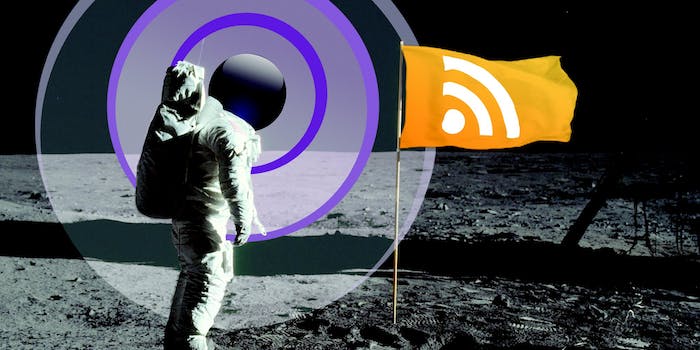 The state of podcasting 2013

Roman Mars,  Chris Mancini, Matt Belknap, and Jessie Thorn sound off on the opportunities and challenges facing the medium's development.

You can describe Roman Mars’s thoughts on the future of podcasting in a word: “sanguine.”

“Honestly, I think right now is the best time ever for podcasting,” said Mars, the host and creator of 99% Invisible, a public radio segment and podcast focused on architecture and design. “The connection that I see with audiences in podcasting is better now than it ever has been. When you have an audience that’s passionate, and you’re prepared to make something great, it’s magic.”

Mars has reason to be optimistic. 99% Invisible has grown into a podcast with over 7 million downloads. In 2012, it raised over $170,000 on Kickstarter, becoming the most funded journalism project in the crowdfunding platform’s history.

99% Invisible’s rise has occurred alongside a period of increasing visibility for podcasting, with millions tuning into podcasts from entertainers like Adam Carolla and Chris Hardwick. In turn, many podcasts are increasingly being adapted for television, from Maron on IFC to Nikki & Sara Live on MTV. Podcast networks, including Nerdist Industries (The Nerdist), Maximum Fun (Bullseye with Jesse Thorn), and Earwolf (Comedy Bang Bang), are growing steadily.

It’s a crucial moment in the medium’s development, as increased visibility invites both opportunities and challenges. Across the board, the general consensus is that the medium’s popularity depends on its ability to become more user-friendly.

“There’s something like 31 million people that are downloading at least one podcast a month in the United States; that obviously leaves a huge number of people who aren’t,” explained Matt Belknap, the producer of popular comedy podcasts Never Not Funny and Doug Loves Movies and the cofounder and director of content for the upcoming podcast platform ART19. “And I think a big part of it is that it’s a very different experience to actively select an audio program to listen to. Radio benefits hugely from the fact that it’s just there.”

When it launches later this year, the freemium ART19 will join a field of players trying to streamline the podcast experience and remove the barriers to entry that, many hosts say, are scaring away potential listeners.

“Even if people are interested, there are too many steps. If you put two steps in front of something you lose 50 percent of the people who are interested.” 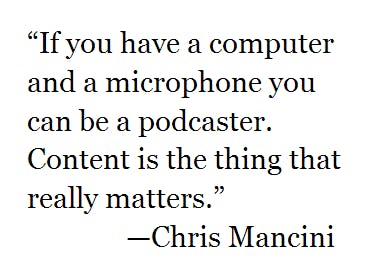 Many podcasters agree that the medium will not reach the recognition of radio until it’s more easily available in the most popular venue for spoken word content: your car’s dashboard. Automobile integration is a major area of focus for the San Francisco company Stitcher, whose popular podcast app seeks to create a more fluid, accessible podcast—or “on-demand Internet radio,” as cofounder and CEO Noah Shanok prefers it—experience.

“In terms of Stitcher-connected or Stitcher-enabled vehicles, the numbers on the road by the end of 2014 will be in the millions,” Shanok continued, “and one of the big questions is making sure that it’s as easy to use as terrestrial radio. And that continues to be a work in progress. But car connectivity is going to be a big part of what we do going forward.”

Attracting big audiences will also require an enormous diversity of compelling, well-produced, and professional content. Many in podcasting’s most visible genre—comedy—think the time is ripe for new shows, and new networks, with a wider range of hosts and subjects.

But not every difficulty faced by podcasting is as abstract and non-threatening as accessibility or a dearth of diversity. In late January, several podcasters, including Thorn, Adam Carolla, and Discovery’s How Stuff Works network, received letters from Personal Audio LLC, claiming infringement on a patent submitted in 1996 and approved in 2012. Personal Audio’s patent litigation has, in the past, involved suits and settlements with tech players as varied as Apple, Amazon, and Motorola.

Thorn, Marc Maron, Carolla, and others met privately to discuss their response and are working with the Electronic Frontier Foundation to help head off the challenge. With even podcasting’s most successful hosts and producers still pulling in modest incomes—at least relative to large tech firms— the potential for litigation is a considerable concern in itself. 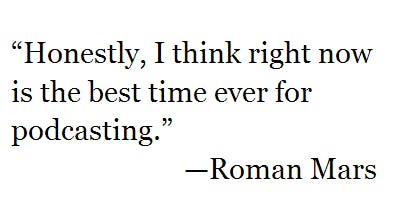 “The average cost of a patent defense, from what I can tell, is about $2.5 million. None of us have that,” Thorn said. “Even the cheapest path out of this costs hundreds of thousands of dollars. It’s an existential threat to this entire industry. Because it’s very different from suing Motorola. They’re suing people whose net worth is $125,000.”

Embedded in that existential threat, though, is a testament to podcasting’s opportunities.

“I can say, as a silver lining, this must mean that we’re doing something right. If patent trolls come after you, then you know podcasting has grown up,” added Belknap. “I don’t think they’d have noticed us five years ago. So that’s a nice compliment.”

Indeed, while podcasting isn’t making many of its hosts rich, and the issue of how to successfully monetize the form has loomed since its beginning, there are new signs of life. There’s not a silver bullet yet, but more and more podcasters are finding ways to make it work—from subscriptions to advertising to crowdfunding.

“No one’s sure what the best way to do it will be,” said Chris Mancini, cohost of Comedy Film Nerds and the cofounder of the Los Angeles Podcast Festival. “No one knows how long it will take. It may be a gradual build. But an exciting thing is that anybody can do it. If you have a computer and a microphone you can be a podcaster. Content is the thing that really matters.”

“Folks need to be patient. We already see, on the music side, a fair amount of revenue,” Shanok said. “[Monetization] is coming, and it’s probably going to be a hybrid of advertising and some subscriptions, similar to Pandora. It will take a bit of patience. We all want to see the monetization side grow, and it has and it will, but we’re only in the second inning of this game.”