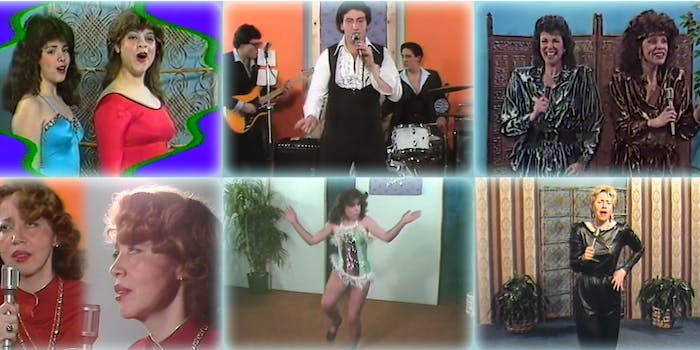 Fall down the rabbit hole of ‘Stairway to Stardom,’ the Internet’s favorite talent show

Before 'American Idol' and 'The Voice,' there was this.

The scene opens on a close-up of sequins, dozens of tiny blue and silver eyes beckoning you inside. A young girl raises her arms, silver waterfalls streaming underneath. The music starts, but it’s the wrong track.

There’s silence. Time freezes. The track starts, and Melissa Ann Ledwon finally leads us on a white-knuckle ride through a two-minute tap-dance routine, which ends in an uncomfortable split.

Welcome to Stairway to Stardom.

Performers on the NYC-based public access talent show, which ran from 1979-1992, showcased their talent on a low-budget set, accompanied by drab houseplants or family-portrait backdrops. The show’s disco theme song promised you’d see “tomorrow’s stars today.” Stairway to Stardom was talent show, but it was also a spectacular exercise in courage and abandon.

In the last five years or so, clips from Stairway to Stardom started showing up on YouTube, and have been showcased by entities like the Found Footage Festival. At the end of May, 15 full episodes appeared on the show’s YouTube channel, so fans can now see the show in context. One of the show’s biggest supporters, Mitch Friedman, maintains the channel.

Friedman told NPR back in 2006 that he tracked down host Frank Masi in the early ‘90s and asked if they could have access to episodes of the show. Masi passed away in 2013, but when Friedman interviewed him in 1993, a year after the show went off the air, he recounted his own attempt to find stardom as a singer in the late ’60s; the calls he got from people upset that he’d featured black people on the show; and Songs to Remember, the precursor to Stairway to Stardom, which featured Evie Day as co-host.

Masi was a lounge-singer throwback, and opened every episode of Stairway to Stardom with a serenade. Astoundingly, he explained he made everyone audition, so the performances you see all “passed his litmus test,” Friedman told NPR.

Competition shows like American Idol and The Voice have turned talent searches into a democratic process, but Stairway to Stardom existed as a secret of sorts, a show you accidentally stumbled upon. You’ll feel guilt for laughing at some of these performances, but there’s also an elation that comes with stumbling upon them.

The show’s performers didn’t go on to mainstream fame, but the talent was vast: There were a lot of singers, including Masi, as well as comedians, tap dancers, rappers, puppeteers, and magicians. Some clips have become Internet favorites because of their amazing terribleness. Case in point: young Joe Refano’s daunting version of “Lady in Red” in 1988, and Michelle Sutlovich’s incredibly interpretive 1982 dance routine.

One performer who remembers Stairway to Stardom is Bobbie Horowitz, one half of the singing duo Horowitz & Spector. Their 1988 performance of body-positive anthem “Boiled Chicken” is required viewing, as is “Something’s Rotten in Transylvania,” their Halloween hit. She says she’d seen the clips on YouTube before, but that she’d forgotten they came from Stairway to Stardom.

“How could I forget!” she said by phone.

She explains that Benny Martini, their piano player at the time, is the one who encouraged them to audition for the show.

“It was great for us,” she said. “Anything you could do to get attention was great, and we won the MAC [Manhattan Association of Cabarets] award that year.”

Horowitz, who still performs monthly cabaret shows in NYC, recalls a Stairway to Stardom studio in a house on Staten Island. “And I remember driving out there, and it didn’t look at all like you were going into a studio,” she said. “…I do remember there was no audience, so you stand there and you do it with the microphones—he had microphones—and there’s a guy in the corner recording.”

Horowitz said “Boiled Chicken” came to her and Spector in a moment of reflection.

“We were talking about our high school days and how we always felt fat,” she said. “We always felt like the fat girls and when I look back now at my pictures, I wasn’t as fat as a I thought I was! It was also getting to be anorexia time at that point in America, when it was really crazy, the getting thin.”

Horowitz says she suspects the clips have gotten some people who weren’t familiar with her cabaret show out to see it. Other former performers have grabbed hold of this new wave of interest. However, Stairway to Stardom remains a message in a bottle, a rarefied look at pop culture’s regional footnotes.

You can essentially play roulette with the full episodes, but here are four good ones to start with: