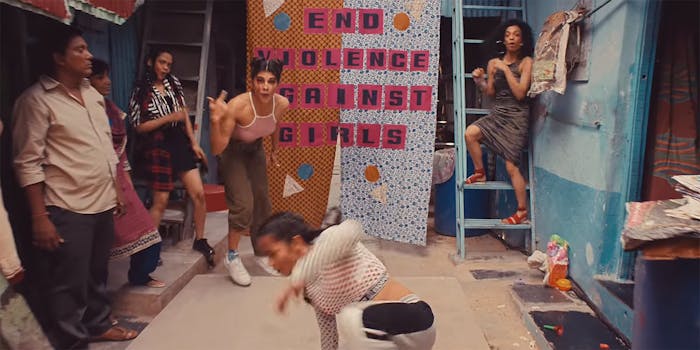 Screengrab via The Global Goals/YouTube

While it doesn’t look like that Spice Girls reunion is happening any time soon, a new campaign is giving one of the group’s songs new life.

On Tuesday, a 2016 update on their 1996 hit “Wannabe” started making the rounds, featuring artists from Nigeria, South Africa, Sri Lanka, Canada, the U.K., and America putting forth new ideas for what they really, really want: end violence against girls, quality education for all girls, end child marriage, equal pay for equal work.

It’s a tandem campaign from Project Everyone and Global Goals, and has gained momentum with the hashtag #WhatIReallyReallyWant, which urges women and men to tell world leaders what they want in terms of gender equality. The video’s director, MJ Delaney, said it’s about translating the idea of “girl power” to a global audience:

The Spice Girls were about a group of different women joining together and being stronger through that bond, and these differences are what we want to celebrate in this film, while showing there are some universal things that all girls, everywhere, really really want.

Flattered and honoured that our crazy song is being used so beautifully @theglobalgoals #WhatIReallyReallyWant https://t.co/WwZqHdiVSk

Piers Bradford, Project Everyone’s managing director, says “the whole concept started with the track. It is the iconic anthem for girls’ empowerment, and to tie in with the 20th anniversary of ‘Wannabe’’s release seemed apt.” He adds that more than 1,900 Instagram users are also circulating the hashtag.

The video is set to play in movie theaters internationally this summer.