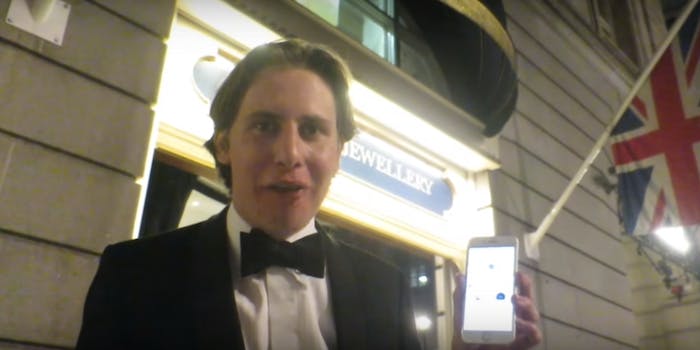 Gatecrashing genius or plain-old ticket thief? It really could go either way.

Crashing celebrity parties seems like a fun hobby, like organizing a low-risk heist. But YouTube vlogger James Ware, who gatecrashed the premiere of the new James Bond film Spectre by stealing someone’s ticket off of Instagram, probably went too far.

Ware found the photo of the ticket and used its barcode to sneak into the premiere. It was a clever trick, but also an undeniably douchey one. We can’t help but wonder what happened to the ticket’s rightful owner, and whether they were turned away at the door.

Ware described his plan as being worthy of James Bond himself, but we doubt 007 would approve of publicly documenting the whole thing on YouTube. Since Ware’s channel also includes things like instruction videos for breaking into luxury hotels, we’re guessing it’s only a matter of time before he gets caught.

Update 5:54pm CT: It was only the spectre of deceit after all. Business Insider confirmed with the Royal Albert Hall’s box office that Ware actually purchased a ticket to the event. “We are happy to confirm that he was actually an official premiere guest,” an employee wrote to BI.