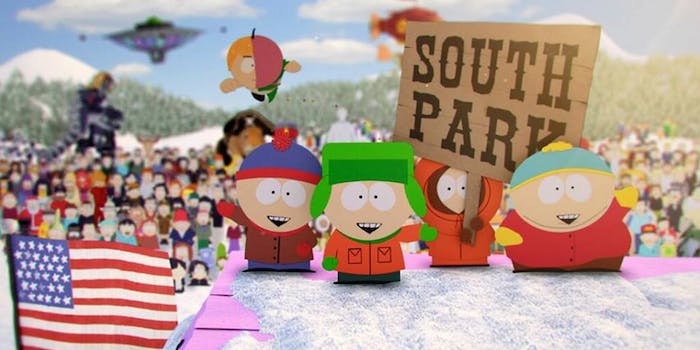 ‘South Park’ tackles the NSA, just not as expected

Judging from the reaction of fans online, the highly anticipated premiere episode of South Park's 17th season was a success.

Judging from the reaction of fans online, the highly anticipated premiere episode of South Park‘s 17th season was a success. Always topical, South Park dove right into the most important issue of the year—the U.S. government’s controversial surveillance programs. Also, it delivered the regular dosage of pussy and dick jokes.

The show leaked aspects of the storyline in advance; anyone who followed their Twitter account knew that the NSA was going to be the theme of the episode.

What may have surprised many viewers was that the focus of the show wasn’t entirely about the troubling actions of intelligence agencies (although it was parodied well), but the behavior of the public following the revelations leaked by Edward Snowden. But it fits: South Park has never missed an opportunity to mock the reactions of its fans or to challenge their beliefs.

In the opening scene, Cartman takes on the role of someone over-using social media to pour out the trivial yet private details of his daily life—online. Of course, simultaneously, his biggest concern is how easily the federal government could track him and acquire his personal information. Desperate to put an end to the surveillance state, he announces his secret plans to undermine the NSA loudly, while in a room full of people, and into a cellphone that he assumed was already bugged.

Instead of recognizing that he’s the one needlessly sharing much of his personal information with the government, Cartman decides to ditch Twitter for Shitter, a new social media company whose spokesman is Alec Baldwin. This new platform instantly transmits his every thought online and to everyone else using Shitter. It also echoes his thoughts out loud so that anyone nearby can hear them. He plans to use this new form of social media to expose the NSA’s plans for monitoring him, oblivious to the fact that it destroyed the last bit of privacy he had left.

As Cartman infiltrates the NSA headquarters, the spies are seemingly unaware of his agenda, even though he’s audibly transmitting his plans to expose them while in their immediate presence. It’s a subtle jab at the ineptitude of an agency that was oblivious to whistleblowers operating freely within its own ranks.

Later, while Cartman’s new boss is giving him a tour of the NSA facility, one of the analysts alerts the supervisor, saying, “I got a 24-year-old male in Albuquerque. He just emailed his wife and asked if she could go to the store after work. Then he called a fitness center to set up a membership. He liked the fitness center so he tweeted his friends that they should try it out.” The supervisor responds, “All right. Keep an eye on them. Let me know if anything changes.” 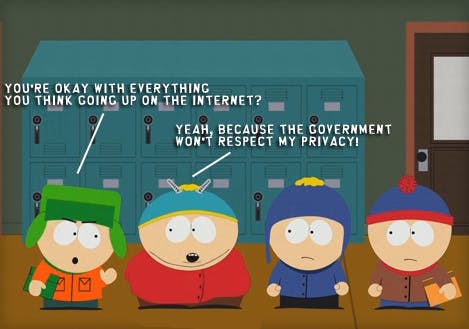 Meanwhile, in a separate storyline, the character Butters becomes confused with the role of government after believing he’s being watched at all times. He begins praying to the government for protection and Christmas presents, then establishes a religion at the DMV where followers find inner peace by confessing their sins to federal employees. Later, at the end of the show, he manages to convert Cartman, telling him, “Just let the government into your heart.”

The final jab targeted the self-importance of American citizens who’ve become increasingly paranoid in the wake of Snowden’s disclosures. While Cartman is confident that the U.S. government is targeting him specifically, later he learns the agency doesn’t even consider him important enough to monitor. This infuriates him. Incensed, Cartman eventually removes his fake mustache after learning the NSA’s secrets and exposes his identity to the agency to prove that he does, in fact, deserve to be under surveillance.

In the end, Cartman manages to blow the whistle on the NSA’s program (which utilizes an imprisoned Santa to track the world’s citizens) but unfortunately discovers the public doesn’t give a shit. The citizens of South Park assume that whatever the government is doing, it has only their best interest at heart. It’s hard to say if this conclusion parallels reality, but if true, America may be closer to South Park than we thought.