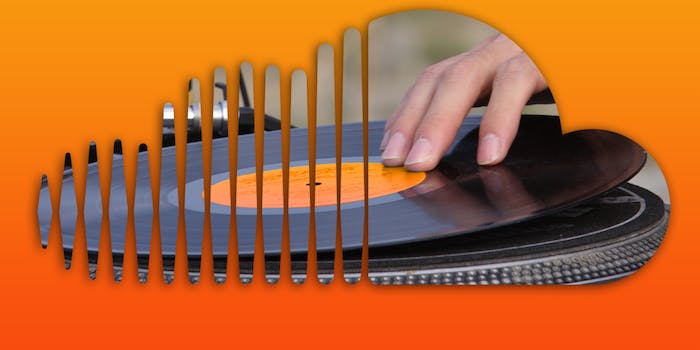 How remix culture lives and dies on SoundCloud

Bootleg remixes infringe copyright—so why are so many of them never taken down?

Do a search on SoundCloud for “Turn Down for What” and you get over 500 results, most of which are unofficial remixes done in a laundry list of styles: trap, reggae, hardstyle, bhangra. Given the track’s popularity, and SoundCloud’s enormous community of bedroom hip-hop and EDM producers, it’s no surprise that the hit club anthem by DJ Snake and Lil Jon has been reworked so many times.

There’s just one problem: None of these “bootleg” remixes were authorized by DJ Snake, Lil Jon, their publishers, or their label, Columbia Records. They are acts of copyright infringement, which means that SoundCloud could, at any time, remove them from its site.

But for now, the “Turn Down for What” remixes remain, along with thousands, perhaps even millions, of SoundCloud-hosted bootleg versions of tracks by major artists like Kanye West, Daft Punk, Adele, and Bob Marley. They’re not hard to find or identify; many proudly declare their unlicensed status with a “#bootleg” hashtag. Some percentage of them (SoundCloud won’t provide exact numbers) do get removed, but most stay up, often for years.

Despite the openness with which they post, most SoundCloud remixers understand that what they’re doing is not, strictly speaking, legal. “I was just hoping and praying I never received an email saying, ‘Oh, hey, you gotta take your song down for copyright infringement,’” says M. Breeze, a Jersey club producer from Newark whose “Turn Down for What” remix has gotten over 15,000 plays. He’s also done bootleg versions of well-known tracks by Iggy Azalea, Sam Smith, and Steve Aoki, but so far, he’s been lucky: “Never have I had to take anything down.”

Another “Turn Down for What” remixer, Matt Rage, hasn’t been so fortunate. “I’d say about 80 percent of the tracks I post get taken down because of copyright issues,” the Hawaii-based DJ/producer reports. “I see why they do it, but at the same time, guys like me that enjoy taking great songs and putting your own twist on them can’t share any of our work… It’s definitely a bummer.” For now, Rage’s trap rework of “Turn Down for What,” co-produced with fellow Hawaiian DJ Osnizzle, remains available.

Despite the occasional flurry of takedowns, a widespread perception persists among remixers that their work is the online equivalent of driving 5 miles per hour over the speed limit: technically illegal, but tolerated as something relatively harmless.

“The general consensus is it’s OK,” says Jasper Patterson, a Los Angeles-based electronic musician who works under the name Groundislava. “It’s probably not completely legal. But it’s odd that if it is illegal, it kinda gets ignored.” Patterson’s Groundislava SoundCloud page features his original music alongside ethereal bootleg remixes of songs by Drake, Katy Perry, and Gotye, among others. He’s never received a takedown notice for any of them. (He is, seemingly, one of the few remixers who hasn’t tackled “Turn Down for What.”)

SoundCloud has long had a reputation, despite explicitly banning “any Content to which you do not hold the necessary rights” in its terms of service, for letting users post DJ sets, podcasts, mashups, remixes, and other “derivative works” built on copyrighted material from other sources. But since 2011, when it introduced Audible Magic’s digital fingerprinting technology to identify and remove infringing content, the service has begun taking steps to change its Wild West image.

The word “remix” never appears in SoundCloud’s community guidelines or terms of service, but a statement from a company representative makes its official stance on such content clear: “SoundCloud is a platform for creators to share their originally created sounds… [W]here content is blocked or removed at the direction of rightsholders because the relevant rights have not been cleared, we need to take appropriate action as a responsible hosting platform.”

Still, myths regarding SoundCloud’s policy on remixes persist. “The accepted policy seems to be, as long as you aren’t selling it, it’s OK,” says Patterson, echoing a common sentiment among other remixers we spoke to. Some remixers even go one step further and claim that since they’re not profiting from their work, it falls under the legal provision of “fair use.”

But “probably eight out of 10” musicians don’t understand fair use, according to Jonathan Tobin, an attorney (and occasional electronic musician) whose Counsel for Creators legal firm specializes in representing creative types on issues of contract negotiation, intellectual property, and copyright.

“Among people who are creative, there’s sort of a resistance to understanding how the law actually works,” Tobin says. “In light of that resistance, what has sprung up is a mythology—the key figure in that mythology being fair use.”

While fair use does protect criticism, commentary, academic works, and, in certain cases, parody (which is why The Daily Show can get away with running seemingly any film or television clip it chooses to), it doesn’t protect common 21st century musical practices like remixing and sampling. “I actually disagree with the law,” says Tobin, “but that doesn’t make the law any different.”

Another common misconception is that if the original artist approves your remix, it’s OK. Lil Jon, for example, is an active SoundCloud user and occasionally comments favorably on remixes of his work (including M. Breeze’s), which may lead some producers to believe that their Lil Jon reworks are safe from takedowns.

But copyright ownership in music is complex, and most artists don’t control 100 percent of the rights to their songs. Official remixes must obtain permission both from whoever owns the composition (typically the songwriters, although a record label or third-party publisher may own a percentage) and whoever owns the original recording upon which the remix is based (typically a combination of the artists to whom the track is credited and their record label).

“The artist doesn’t even know that sometimes,” says Morgan Crozier, a 23-year-old musician and entrepreneur from Austin, Texas, who has researched music copyrights extensively. “They don’t even know that they don’t own their music.”

Based on his research, Crozier has created a microsite called DontSample.Me, which lists nearly 3,000 artists whose labels—mostly the majors—frequently issue takedown notices against online infringing content. Despite the abundance of “Turn Down for What” remixes on SoundCloud, Lil Jon is one of the artists listed, because he releases music through Columbia and Epic Records, which are both subsidiaries of a major label, Sony Music Entertainment. “He’s still a high-risk artist,” says Crozier.

Columbia Records, which released “Turn Down for What,” would not comment for this story, so it’s impossible to know why the label hasn’t issued more takedown notices against the track’s many bootlegs. But both Columbia and its parent company, Sony, have requested SoundCloud takedowns in the past. One of their targets was Ethan Hein, a professor of music technology at NYU and Montclair State University who dabbles in remixes and mashups, often for academic purposes. His reworks of tracks by two Sony artists, Britney Spears and Michael Jackson, were both removed. (He’s since restored his megamix of Michael Jackson’s “Wanna Be Startin’ Somethin’” with a new version that he believes better disguises its source material from SoundCloud’s Audible Magic filters.)

Hein believes the only possible resolution to the cat-and-mouse game played between remixers and SoundCloud lies in copyright reform. “I believe that sampling should work like cover songs: There should be a compulsory license with a fixed fee structure. I strongly believe that the right to comment on culture via remixing far outweighs the rights of copyright holders to control transformative uses.

“Copyright law in America in general is severely lopsided in favor of rights holders,” Hein continues. “Terms should be much shorter and restrictions should be much looser. As things stand, a guy like me has to continually break the law to make art, which is crazy.”

But until the law changes, SoundCloud is a company that, in many ways, finds itself at odds with its own user base. A type of content that many of those users see as mere creative expression remains a form of copyright infringement, one that SoundCloud is legally obligated to remove from its servers when asked to do so by copyright holders.

For SoundCloud, the stakes couldn’t be higher. According to Bloomberg, the company is currently in negotiations to license music from all three major labels (Universal, Sony, and Warner) in exchange for giving the majors an equity stake in their business, which might be worth as much as $600 million. If the negotiations succeed, SoundCloud could become the next Beats Electronics, which also traded ownership stakes for licenses with major labels, before being acquired by Apple for $3 billion. If the negotiations collapse, the labels could sue SoundCloud out of existence for failing to adequately police its content.