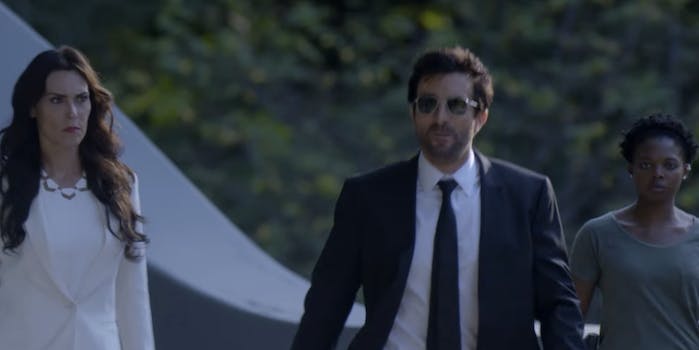 Another week, another streaming network trying to take over the online TV world—or at least the portion inhabited by cord-cutters.

In announcing Powers, its first made-for-web series, Sony hopes to deliver original online programming to its 10 million PlayStation 4 owners, as well as the tens of millions more who own earlier models of the console. Powers, the trailer for which debuted at New York Comic Con, is based on the comic book of the same name in which a pair of Chicago homicide cops are tasked with solving cases that involve superhero perpetrators. Think X-Men meets The X-Files.

The show, starring Christian Walker and Deena Pilgrim, debuts in December. The pilot will be available for free to every PlayStation Network customer, with PlayStation Plus subscribers getting free access to the entire series. PS+ is $9.99 per month, $24.99 for three months, or $49.99 for a year.

With Powers, Sony joins the ranks of Amazon, Hulu, Netflix, Starz, and other companies that are getting into the business of online-only original programming. One major difference that plays in Sony’s favor is its ownership of Sony Pictures Entertainment, a major source of movie and TV production. PlayStation users already have access to a number of Sony films and TV shows through their game consoles and the Sony Entertainment Network store.

Sony needs a winner in the alt.TV space. It has been more than nine months since the company announced its cloud TV service at CES, but the offering is already receiving harsh criticism well prior to launch. A report in the New York Post claimed that Sony’s new cloud product will cost as much as $80 per month, while a competing cloud TV deal from Dish is rumored to be priced closer to $30 per month. Sony has not said whether its PlayStation network content will be made available to its new cloud TV subscribers.