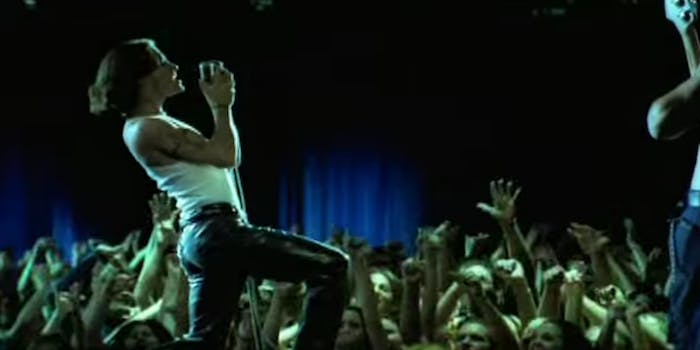 Stapp claims that the paranormal experience with the Stone Temple Pilots and Velvet Revolver singer helped bring him to sobriety.

In a new GQ profile, former Creed vocalist Scott Stapp claims that deceased Stone Temple Pilots and Velvet Revolver singer Scott Weiland came to him as a mystical experience, which helped bring him to sobriety.

Creed's Scott Stapp on Scott Weiland's death: 'That should have been me' https://t.co/y76MXSNG7g pic.twitter.com/HZ8L7ehjTb

All of a sudden, it was almost like Weiland speaking to me from the grave, man. It was a very weird feeling that I felt. I remember being in the bathroom, looking in the mirror, on the bus, and really feeling like I could hear or feel him saying, “Dude, this could have been you. And this could be you if you continue that path. Don’t do what I did. Don’t go down that road.” And, literally, I’m having this moment.

When asked if he literally saw Weiland:

No. God rest his soul, and my family has prayed for his family and his children, but really it was a crazy, mystical experience. It was just in my face, man. I had my moment of, like, “Dude, he’s speaking to me, man.” Almost as if, from my standpoint, in my life and in my recovery, his death was not in vain. Not only could that have been me, that should have been me. It was just one of those weird things that kinda, like, the stars aligned, the universe arranged itself at the right time to further impact me and further solidify my commitment to my recovery. It was definitely one of those God moments. I get goosebumps right now just talking about it. It was a God moment.

Stapp, of course, has become infamous for his messiah-like complex, specifically within Creed’s heyday. The hard rock band was virtually unstoppable from 1997 through 2000, during the releases of multi-platinum albums My Own Prison and Human Clay. More recently, he’s been known for his flame out following the end of Creed’s Billboard reign.

Today Stapp fronts Art of Anarchy, a band that originally hired Scott Weiland as vocalist. Weiland, though, didn’t see himself as part of the band.

Says Stapp: “[Weiland] said, ‘No, we’re not a band. They paid me to do this and I’m not touring with them.’ And it’s unfortunate how that happened, but what it did was open a door for them to reach out to me.”

In 2014, Stapp uploaded a jarring and paranoid rant to his Facebook page, claiming to be “penniless” and soliciting free legal advice.