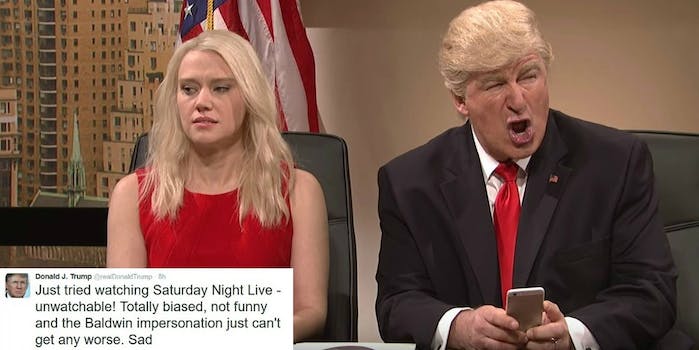 Donald Trump hates the show. But he can't stop watching.

When he wasn’t blocking people on Twitter or defending himself for talking to Taiwan on the phone, President-elect Donald Trump took time out of his schedule last week to retweet a 16-year-old who went on a rant about alleged, but completely unproven voter fraud.

That was the impetus for SNL’s cold open on Saturday when, after RTing the 16-year-old who was tweeting from his high school classroom, Trump, played by Alec Baldwin, looked at the camera and said, “I really did retweet him. Seriously. This is true.”

Said senior adviser Kellyanne Conway, played by Kate McKinnon, while also looking into the camera, “He really did do this.”

And SNL was there to explore what might have happened next.

But what did Trump himself think about all this? Luckily, you can find the answer on Twitter.

Baldwin’s response to that insult was to the point.