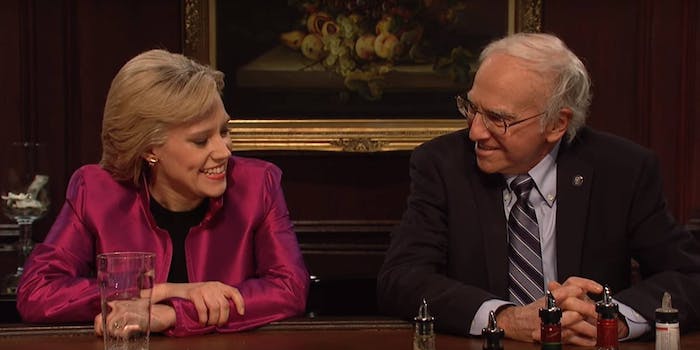 Fred Armisen returned to Saturday Night Live to close out its 41st season. The former cast member hosted the show for the first time since his 2013 departure.

With the next season due to begin in September or October, the finale was also an ideal time to bid farewell to the Hillary Clinton/Bernie Sanders rivalry of the Democratic primary.

Larry David reprised his already-beloved impression of the senator from Vermont in a hilarious cold open with Kate McKinnon as Hillary Clinton.

Set in a bar just before closing time (with Sanders refusing to go home until he was good and ready, of course), the two candidates reminisced about the past few months of campaigning. Ordering drinks, Sanders went for, “something refreshing and revolutionary. Something that draws yuge crowds.” Meanwhile Clinton ordered “Whatever beer no one likes that gets the job done.”

We’re sure this isn’t the last we’ve seen of Larry David’s Bernie Sanders, but this sketch was the ideal finale to one of the wildest primary election seasons in living memory.