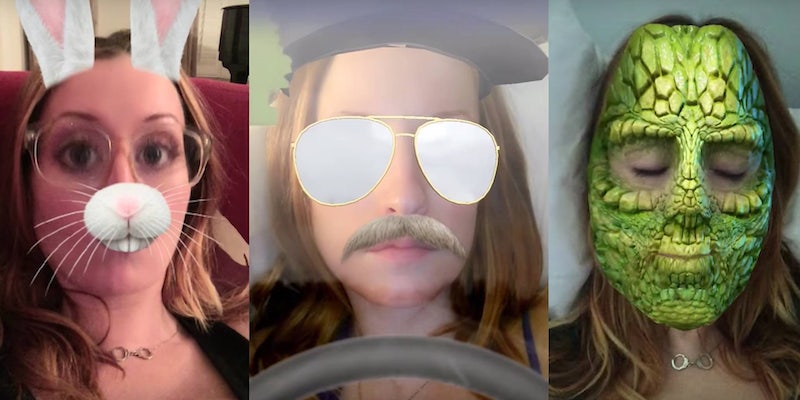 A breakup anthem that deserves its own filter.

Snapchat has made a whole lot of gains when it comes to bringing music to the people.

The ephemeral social app has made it possible to add music to its 10-seconds-or-less videos. It’s also acted as a way to premiere music. Artists like Madonna and Alesso have both taken advantaged of the app’s widespread appeal and direct engagement with fans to bring music videos to the masses.

It seemed as if the only component missing was someone actually shooting a music video directly on Snapchat. In that way, Ingrid Michaelson has filled the void. The singer-songwriter utilized innumerable humorous filters to stitch together footage for breakup anthem “Hell No”—a song just as catchy as the face-morphing 3D filters overlaid throughout the video.

Featuring everything from the saccharine-sweet heart eyes to far more alarming rainbow vomit and pop art-tastic comic book filters, the video acts in tandem with the track’s handclap-happy rhythm and electronic vibe. The single marks a pop pivot for Michaelson, whose previous hits include more acoustic fare.

“Hell No” premiered on YouTube on Friday. In addition to stretching the creative limits of Snapchat, Michaelson appears to be giving a master class in synergy. She’s, of course, promoted the track on her various social media channels. She also received a key endorsement from YouTube thanks to a tweet sent by the company that afternoon.

Written collaboratively by Michaelson, Barry Dean, and Luke Laird, the net result is an empowering breakup anthem. Michaelson described the inspiration on Twitter shortly following the release of “Hell No.”

As much as Michaelson has done to further the medium of Snapchat with “Hell No,” there’s only one thing missing for the singer-songwriter: her own custom filter.

When you can't afford to buy your own geotag. #HellNo pic.twitter.com/h1xvJzbDng

Needless to say, she’s certainly making the most out of other high-profile releases being promoted on the app. What up, Drake?