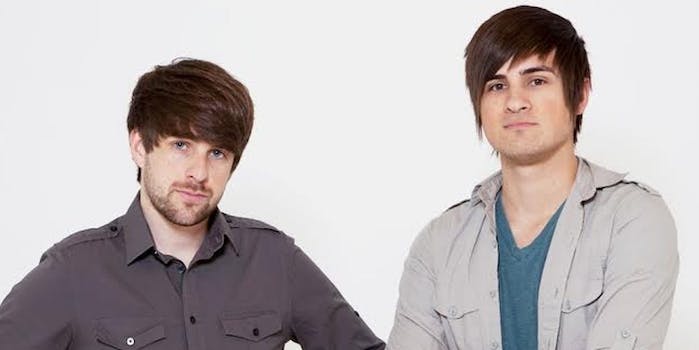 Smosh goes to the movies, but doesn't leave YouTube in the dust.

Smosh is one of YouTube’s more recognizable brands, and now they’re making the leap to the big screen with a movie co-produced by DEFY Media and AwesomenessTV, and distributed by Lionsgate.

For 13- to 17-year-olds, there’s not much bigger than Smosh. The brand boasts over 30 million combined YouTube subscribers, 19 million social followers, and 12 million monthly unique website visitors to a unique mix of comedy, gaming, and music produced by Anthony Padilla and Ian Hecox. The Smosh movie is described as a “high-concept Bill & Ted’s Excellent Adventure for 2014,” where an embarrassing video of Padilla resurfaces online just before his fifth high school reunion. The duo race to remove the clip before it ruins his chance of reconnecting with his crush, with the pair leaping through a portal onto YouTube IRL where they encounter multiple YouTube celebrities.

That’s right, the collaborative nature of YouTube is built right into the plot, with plenty of room for guest appearances of any and every YouTuber a fan could dream of seeing on the big screen. A few are already announced on the press release, including Jenna Marbles, Grace Helbig, Harley Morenstein, Shane Dawson, Mark Fischback, and Dominic “D-Trix” Sandova, but we came up with a few more that we think would be essential to anyone on a YouTube quest and outlined just how those stars could assist our heros.

The Epic Rap Battles of History crew has already proven their ability to fight anyone to the figurative death by rap, and so their battle skills would come in handy if the SMOSH guys encounter any bad guys.

She’s one of YouTube’s youngest big-name stars, so we suspect she’ll be able to give the pair a little youthful insight, especially since they’re dealing with some high-school-level issues. Also, it’s important to look your best in the wilds of YouTube, and advice from this fashionista would go far.

YouTube’s a cappella darlings, the award-winning group could serve as Oracles, passing along ancient YouTube wisdom in the form of instrument-free cover songs. They’ll also look fabulous at the same time.

A little education goes a long way on YouTube, and the ASAPscience guys could help Smosh understand the realities of the new YouTube space they’re navigating on their quest.

Already versed as a Disney parody master, Hall could mash up his song and dance skills as a virtual White Rabbit leading Smosh down the rabbit hole of YouTube.

The king of epic, over-the-top moments in the world of extreme sporting, Devin Graham could help the Smosh guys get out of any tricky situation with a zipline, some parkour, or a giant Slip ’N Slide.

7) The Vlogbrothers: Obviously Hank and John Green are the equivalent of magical warlocks in the world of YouTube, with their own army of Nerdfighters at their beck and call. However, these warlocks serve the powers of good, and they could help Smosh complete their quest.