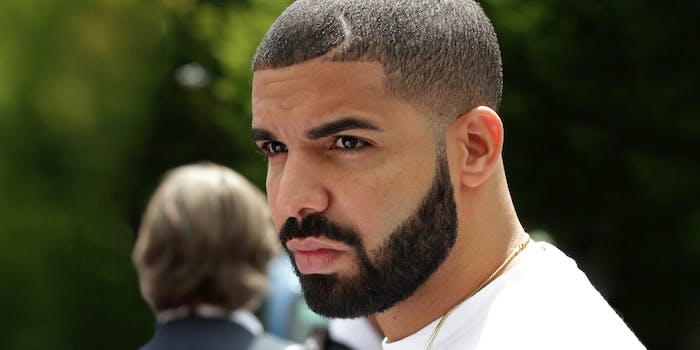 Smoke Dawg was killed over the weekend.

This weekend should have been full of celebrations for Drake. His new album Scorpion is setting Spotify streaming records and had the most one-day streams in Apple Music history.

Instead, heartbreak loomed large over the 31-year-old rap superstar after a friend and former collaborator, Smoke Dawg, was murdered in the early evening hours in his hometown of Toronto in front of dozens of horrified onlookers.

According to the Toronto Police Operations Center Twitter account, two men were shot around 8pm on the corner of Queen and Peter streets in the entertainment district of downtown Toronto. The shooting took place in front of the Cube Nightclub.

Smart, known in the rap world as Smoke Dawg, was rushed to a local trauma center where he died of his injuries. Modekwe was a music brand manager known around Toronto as Koba Prime. A 37-year-old still-unidentified female accompanying Smart and Modekwe was injured in the melee. Officials expect the young woman to recover from her injuries.

Drake and Smoke Dawg collaborated on several projects over the years and the Toronto-born rapper opened for Drizzy on his “Boy Meets World” tour in 2017.

Drake posted a photo tribute of the pair to his Instagram story saying “All these gifts and blessed souls and inner lights being extinguished lately is devastating. I wish peace would wash over our city. So much talent and so many stories we never get to see play out. Rest up Smoke.”

According to CTV News, the Smart family released a statement on Sunday evening through Smoke Dawg’s management company, stating that Smart “leaves behind a one-year-old daughter, along with his parents, 13 siblings, friends and ‘all of the fans his music touched.'”

A member of the Halal Gang—a band of rappers that included Safe, Puffy L’z, and Mo-G—Smoke Dawg is credited with the 2015 remix of “Trap House” featuring French Montana.

Smoke Dawg is the third rapper whose life was cut short by gunfire in the last few weeks. Rising superstar XXXTentacion was gunned down in Florida on June 18 and Pittsburgh-born rapper Jimmy Wopo, 21, was found shot to death with another man inside a car on June 19.

Toronto Police have few leads as to the identity of the shooters or the number of people inside the vehicle. Authorities aren’t even sure of the exact make and model of the car, with early accounts from witnesses stating the perpetrators fled in either a white car or black SUV.

The events outside Cube Nightclub brings the total number of homicides in Toronto to 50 for 2018. There were a total of 66 reported homicides in the city in all of 2017.

Tributes and kind words poured out on Twitter over the weekend for the two budding rap stars. In an interview with Smart’s former college basketball coach, he was remembered as  “very playful” with a “smile that could light up a room.”